Algernon "Algie" Papadopoulos is a character in Bully, and is a member of the Nerds at Bullworth Academy. He was voiced by Brett Tabisel.

Algie is overweight, with red hair worn in a short jewfro and brown eyes. He wears big circular glasses, brown ankle boots, and the standard Astronomy Club sweater vest. His most noticeable feature, however, is his perpetually unzipped jean shorts. In the winter, Algie wears an astronomy club sweater and gray slacks which are properly zipped up. He also wears a pinkish-purple urban hat with a puffball on top. Algie speaks in a high-pitched nasal voice and has a particularly annoying laugh in which he shrieks so hard he has to gasp for breath.

His character design may have been based on or inspired by Carl Wheezer from The Adventures of Jimmy Neutron,[1] a show which was on Nickelodeon.

Algie has some physical similarities to Zack Owens, the comic book store owner. They both have curly red hair, glasses, and are significantly overweight.

An earlier version of Algie was named Angus. Angus was actually slightly neater in appearance than Algie in that his hair was combed. However, he not only didn't zip the fly on his shorts but pulled the waist of the shorts so high that the waist of his underwear was visible through his fly.

Even by Nerd standards, Algie appears particularly nerdy and uncool. He is considered by fellow students and even Dr. Crabblesnitch to be the least popular student in all of Bullworth Academy. He rarely uses his real name, although other students sometimes use it to make fun of him. He is best known around campus for his weak bladder - he wets himself when frightened or nervous, and has been nicknamed "Pee Stain" by his fellow students. On the other hand, sometimes being nervous or frightened makes him unable to go. The various bullies at the school are aware of his bathroom troubles and find the bathrooms a convenient and amusing way to bully him. Trent has forbidden him to use the bathroom on the first floor, and he claims that once he was forced to eat a urinal deodorizer block.

Algie is also a mother's boy, always talking about things she's done for him and how he misses her. He claims she calls him "Prince Algie" and says that he's really special to her, and apparently spoils him terribly. When he's bullied he'll often threaten to tell her, and when he's beaten up he sometimes sobs that he wants her. It is never implied that she does anything besides spoil and coddle him, making it a bit odd that he's forced to attend Bullworth Academy in the first place. He never mentions his father.

Algie desperately wants to be more popular. He sometimes speaks in ebonics to try to make himself sound cool, saying things such as "Word up, coolio" when Jimmy greets him. His attempted insults are particularly weak, including such things as "loser head", "funny pants", "num-num" and "stinky-breath". Also, every time one of the cool students, such as Ted or Lola, pretends to be nice to him, he falls for it. He also has a strong dislike of food condiments and complains about them regularly. His least favorite of them all is mayonnaise, which he dislikes to the point that he uses "mayo-stain" as an insult.

Perhaps not surprisingly, Algie has a suppressed vicious streak. When watching fights he urges the fighters to really hurt each other, and on the rare occasions he gets to bully someone, he giggles wildly and proclaims it great fun.

Algie makes many appearances during the game. His first appearance came in This Is Your School where he is tormented by Gary. Algie's second appearance in This Is Your School is when he is seen in the cafeteria playing Grottos and Gremlins with Earnest and Cornelius. In Save Algie, he asks Jimmy to help him get his due library books from his locker. After that mission, Algie has an errand for Jimmy to take him back to the library. Shortly afterward, he asks for Jimmy's help in Defend Bucky. During the winter, he approaches Jimmy in tears over someone having taken his jacket and put it on the roof of a building.

He then appears in Nerd Challenge when he and Bucky challenge Jimmy to beat Fatty's ConSumo High Score.

Algie ends up involved in the Johnny Vincent/Lola relationship in Wrong Part of Town. Lola was using him for help with her homework, but when the Greasers saw him in New Coventry, they attacked, and he was forced to ride Lola's bike back to campus. Being seen on a girl's bike did not help his image.

In Chapter 4, in Stronghold Assault when Jimmy asks Algie to get the nerds to help him, Algie refuses, mentioning how Jimmy could be nasty to them despite supposedly being on their side. He also refuses to let Pete join the Nerds. He then somehow appears helping Earnest defend the stronghold. He will be standing at the gates with Melvin. Later on, he appears in Funhouse Fun telling Jimmy about the plan to mess up the football team at the carnival, though he doesn't participate in himself. Toward the end, he appears as one of Earnest's "agents" during The Big Game, telling Jimmy to urinate in the Jocks' sports cooler.

In Chapter 5, he appears in Rats in the Library where he criticizes Jimmy's leadership and wishes he could go back to the "Old Days". He then makes an appearance in Busting In, Part I where he calls Jimmy and Pete "losers". Pete responds by saying "Shut up you fat dork". It is also during Chapter 5 that Dr. Crabblesnitch compares Jimmy to Algie unfavorably, referring to Algie as "that fat child who wets himself".

He is one of the students who cheers for Jimmy after the end of Final Showdown.

Angus, a beta version of Algie. 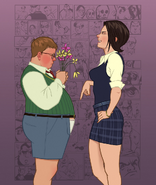