Bully Wiki
Register
Don't have an account?
Sign In
Advertisement
in: Scholarship only, Missions, Chapter 3 Missions,
and 2 more
English

Edit
watch 01:25
Jurassic World: Dominion Dominates Fandom Wikis - The Loop
Do you like this video?
Play Sound
This article features content exclusive to the Scholarship and Anniversary editions of Bully. This feature is not available on the original version of the game.

"I mean, one year, I'm living in Greenland, with a posse of elves, and some talking reindeer and the next I'm getting treated like a drunken fool, thrown out of the North Pole and... put to work in a dump of a town like this."
— Rudy

Balls of Snow is a Chapter 3 mission exclusive to Scholarship Edition and Anniversary Edition. It becomes available at the start of Chapter 3.

Jimmy is walking in New Coventry when a deranged hobo in a Santa suit stops him.

Rudy the bum santa is drunk and mumbles incoherently about getting kicked out of the North Pole and how great things used to be, but in between his ravings he mentions that he's being tormented by the Townies. Taking pity on him, Jimmy agrees to help with a revenge plot.

Jimmy climbs up on a building where there is a pile of snow, and then proceeds to throw snowballs at the Townies as they walk and bike past. Rudy cheers him on each time he connects. Once he's hit 10 townies with snowballs, the mission is complete. Jimmy climbs down from the roof and Rudy moves to congratulate him, but falls down and passes out instead. Jimmy walks away amused.

If Jimmy hits any adults with snowballs, the mission fails. Although he can't get busted, the police will apprehend Rudy when they show up to investigate. 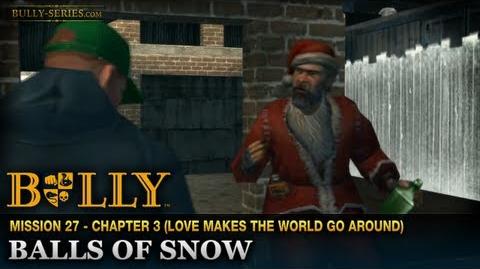 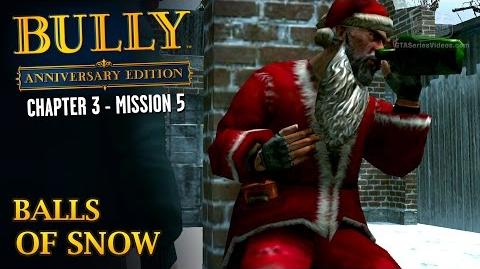