"It's not fair that only the pretty girls receive special treatment. Why don't they ever give out free ice cream to the girl who can recite the Periodic Table?"
— Beatrice

Beatrice Trudeau is a character in Bully, and is a member of the Nerds at Bullworth Academy. She was voiced by Caitlin Greer.

Beatrice has a thin build, brown eyes, and dirty blond hair worn with a pink bow on top. She wears green glasses and a kelly green Bullworth dress, over a white school shirt, and pink dress shoes. In the wintertime she wears a green Bullworth jacket, dark green leggings, mittens, yellow earmuffs, and green boots. It is said she has braces, but they don't show on her character model. Beatrice also wears light green pajamas if she is seen in the girls dorm before 8:45 am.

An earlier version of the character, named Amy, appeared on Tyler Wilson's website. Amy looked similar to Beatrice, but she wore her skirt much shorter and had a misshapen, pointy nose and a squint. In addition, her glasses were thicker and brown rather than green.

Beatrice is verbally bullied constantly by some of the male and female students, especially Mandy. Mandy refuses to allow Beatrice onto the cheerleading squad, to which Beatrice retaliates by refusing to allow Mandy to get help with her classwork from the study groups that the Nerds run. She considers Bucky a good friend. Troy mentions a rumour that Beatrice is "a slut who pounds the Nerd boys".

Beatrice spends almost every waking hour on pursuing her dream of being accepted into medical school. She wants to be either a neurologist or cardiovascular surgeon and also wishes to find the cure for cancer. She is able to recite the periodic table of the elements and displays a great deal of pride in this, sometimes reciting it to herself as she walks, and complaining that she's never been given a reward for being able to do it. She advocates for the removal of all non-academic classes from the school curriculum. According to Christy, not a single female alumni became a doctor, which makes Beatrice a little upset.

Despite her fragile temperament, Beatrice proves quite adept at manipulating Jimmy. She also, apparently, has tried out for the Cheerleading Squad repeatedly, despite her stated disapproval of all non-academic subjects.

Jimmy first encounters Beatrice early in Chapter 1, when Pete asks him to deliver a package to her. Shortly after that, Jimmy encounters Beatrice and Mandy when he wanders into the Girl's Dorm. Mandy has stolen her lab notes, and Beatrice manipulates Jimmy into retrieving them for her from Mandy's locker in the gym. After this, she falls in love with Jimmy and writes about him in her diary. In Chapter 3, The Diary is subsequently confiscated by Mr. Hattrick when he catches her writing in it, and so she manipulates Jimmy again into retrieving it from the school after curfew. Jimmy, despite having professed disinterest in her earlier, returns her affections after this.

In the optional Chapter 1 mission Character Sheets, she gives Jimmy a soda when he's fighting Troy and Davis when he's trying to get back one of Melvin's Grottoes and Gremlins character sheets from the bullies who stole them.

In the Chapter 5 mission Rats in the Library, Beatrice is seen in front of the library with many of the other nerds, complaining with them about the rat infestation in the library.

During Chapter 1, Mandy and Beatrice have a catty exchange on the bulletin board. Mandy posts something requesting the location of Beatrice's "lost popularity", then ridicules Beatrice for not making the cheerleading squad. Beatrice responds by saying the Nerds will tutor anyone except for Mandy.

Beatrice can be seen entering several of Jimmy's classes.

Amy, a beta version of Beatrice.

Another image of the beta version of Beatrice

Mandy threatening Beatrice in "That Bitch".

Beatrice as she appears in-game. 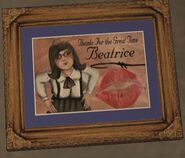