Busting In, Part I

Edit
watch 01:36
We're Getting Mutants in the MCU - The Loop
Do you like this video?
Play Sound

Busting In, Part I is a storyline mission in Chapter 5.

This mission starts outside the back of the school, with Jimmy and Pete talking. Jimmy, who just got expelled, is discouraged and ready to give up, and says the fight between Bullworth and the Townies isn't his business anymore. Pete encourages him to at least see what's going on with the Townies. Deciding to go for it, Jimmy states that he'll need some back up - someone "big who doesn't hate him yet." They both immediately think of Russell.

Jimmy travels to Russell's house in Old Bullworth Vale. Somehow, Russell has stolen a police motorcycle. Jimmy has to follow him on a motorscooter. He can also bring the Go-Kart (Unlocked by completing all 8 Go-Kart Races) and use it instead. If he falls too far behind, he fails the mission. 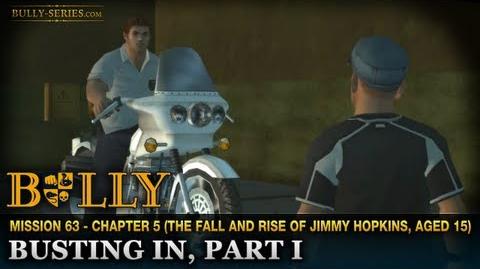 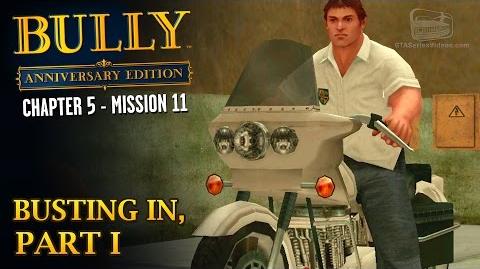