After Russell has smashed through the gate, he somehow manages to get up relatively unscathed. The police turn up, however, and he runs off. Zoe arrives and agrees to help Jimmy find Edgar, the leader of the Townies.

Zoe will accompany Jimmy for this mission. She has a life bar, but she stays back away from the fights. Attacking her fails the mission.

First, take a left into a fenced off area containing a lot of heavy duty electrical equipment. Jimmy has to press two red buttons to cut the power. The first button is easy to reach, but is being guarded by Otto and Henry. After hitting the first one, Jimmy has to crawl under a fallen generator of some sort, fight off Duncan and Leon, and hit the second button.

Next, go to the Red Star building, which is just another industrial building. Zoe tells Jimmy that a gate is controlled by an electric switch inside an office. The switch is unguarded and Jimmy easily hits it. Zoe explains that now they should be able to reach the Chem-O Plant, but they'll have to get the key from Edgar's second-in-command, Omar Romero.

They run into a locked electric gate, and so Zoe tells Jimmy to cut through the train yard. The train yard features a train car that's loaded on the roundhouse. Jimmy has to rotate the roundhouse to get through. Once through, he's in an alley lined with dumpsters, where Leon and Otto try to ambush him with firecrackers. The switch for the gate isn't right behind it, and Zoe sends Jimmy around a nearby building. He has to fight off Gurney and Jerry this time. The switch opens not only the gate blocking Zoe, but the last one before the Chem-O Plant.

At the foot of the ramp leading up the Chem-O Plant, all the Townies except Edgar and Omar are gathered. Jimmy is doubtful of his ability to fight them all, and so Zoe distracts them so he can sneak by. On the top of the Chem-O Plant, he finds Omar. Omar has no special moves but a much larger life bar than usual. After knocking him out, Jimmy obtains a key card that gives him entry into the inside of the Plant.

The boss fight mission, Showdown at the Plant, begins here. 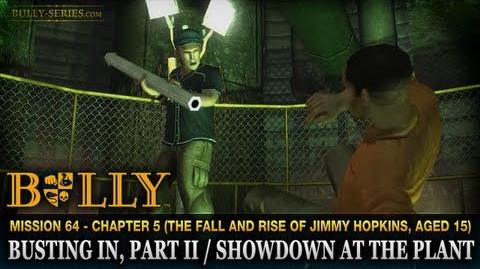 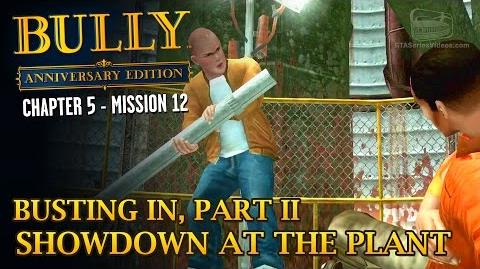