Character Sheets is a non-storyline mission first available during Chapter 1.

This mission was inspired by an event in the life of head Bully producer Jeronimo Barerra, in which a bully stole some gaming books from a paraplegic friend of his and Jeronimo tried to retrieve the books for him.[1][2]

Jimmy meets Melvin outside the library. Melvin is distraught because the Bullies have stolen four of his Grotto's and Gremlins character sheets. Melvin offers Jimmy the task of getting them back for ten "groats". Jimmy accepts.

Jimmy has to retrieve four different sheets from the bullies. He can get them in any order.

The first character sheet is with Davis. Jimmy sees Davis hanging by a wall and gives chase, Davis will drop marbles to trip Jimmy up during the chase. Jimmy catches up with him and gets the character sheet back by using force. If Davis gets far enough ahead he'll stop running and wait, which gives Jimmy a chance to take him out with the Super Slingshot. He will stop running after two laps of the school, in order to fight you.

The second character sheet is with Troy. He is outside the Boys' Dorm and is taunting Bucky with it. Jimmy intervenes and beats Troy up and collects the sheet.

The third character sheet is with Davis. This time Davis is outside the Auto Repair Shop and has Troy with him as backup. They have cornered Thad, Beatrice and Fatty. Jimmy arrives and the nerds ask him to help them, then flee, but Thad comes back to help Jimmy fight, and Beatrice brings him a can of Beam Cola. Once Davis is knocked out, Jimmy can pick up the sheet.

The fourth character sheet is with Trent. He is at the side of library with Troy. Once Jimmy arrives, he demands the sheet, but is challenged to a game of ro-sham-bo against Troy. Jimmy thinks it's stupid, but Troy goes ahead and kicks Jimmy in the privates. The player has to try and make Jimmy stand up by repeatedly hitting a button. Jimmy has until the count of 5 to get up. If he does, the bullies drop the sheet and run away. If he can't, they walk off laughing, and Jimmy can then beat them up to retrieve the character sheets.

With all the sheets in hand, Jimmy returns them to Melvin. The groats he was promised turn out to be regular dollars. 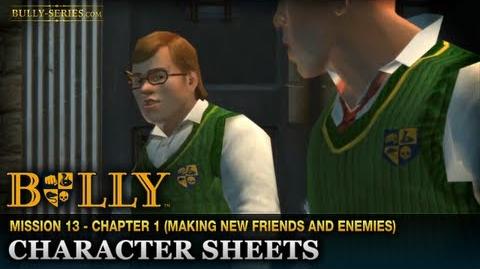 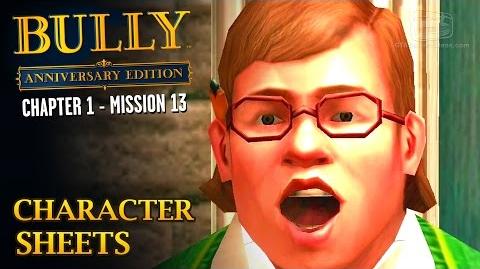 Retrieved from "https://bully.fandom.com/wiki/Character_Sheets?oldid=81496"
Community content is available under CC-BY-SA unless otherwise noted.