Chemistry is one of the minigame classes at Bullworth Academy and is taught by Dr. Watts. It involves the player pushing specific buttons as they pass through the box on the screen. The five chemistry classes occur during the mornings and give the player greater access to weapons at the chemistry set in Jimmy's dorm room.

The Wii version of Chemistry is changed drastically from the original Bully, where it is virtually identical to the gameplay during Shop. Instead of hitting buttons at the proper time, the player has to make certain motions with the Wii-mote and Nunchuk. Jimmy's actions on screen correspond with the action requested by the player. For example, if the player is asked to make a back-and-forth motion with the nunchuk, Jimmy stirs the experiment he's working on. The music has also been remixed; it is now clearer, louder and slightly different in tone.

On the Apple and Android versions of Bully, the player must tap one of the four buttons that passes through the box. The buttons depict of a blue bottle (upper-left), a yellow magnifying glass (lower-left), a green test tube (upper-right), and a red chemical bottle (lower-right).

If the player does not select the correct button or fails to push it in due time, they have two chances of restarting. After three unsuccessful attempts, the player will fail the class. 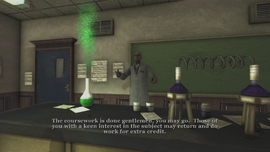 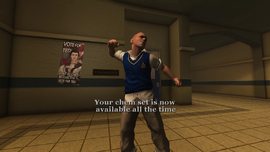