"It's America! We go in there with threats and bribes until we get what we want. If all else fails, we beat the crap out of everyone."
— Jimmy Hopkins
"Russell... likes to HURT PEOPLE... for PEACE."
— Russell Northrop

Complete Mayhem is a storyline mission in Chapter 5.

Zoe is waiting for Jimmy outside her house in Blue Skies Industrial Park, but she's agitated and not happy to see him. She breaks the news that a full-scale riot has broken out in Bullworth Academy. Zoe goes to get the Townies together, while Jimmy has to track down Russell. In the previous mission, Russell had smashed a police motorcycle through a barricade and is now hiding in the Wonder Meats Factory from the police.

Jimmy must dodge the police and find Russell where he's hiding inside the Wonder Meats Factory. Russell is in trouble because he had crashed a police motorcycle in the previous mission, and his shirt is torn and stained with soot and dirt and according to Russell he stinks like meat. Once Jimmy finds him, Russell flees. Jimmy follows him, and the police chase them both. Russell hides in an alley and pulls Jimmy in after him, the police don't notice and run away. Jimmy and Russell then head to Bullworth and meet Edgar, Gurney and Duncan outside the front gate of Bullworth Academy.

Take Down the Clique Leaders[]

The gate is locked, but Russell charges it headfirst to break it open. Edgar, Gurney, and Otto (who has somehow replaced Duncan) run to try and get the fights broke up while Jimmy and Russell head to look for the clique leaders. Inside the school grounds, all the students from the four main cliques (Nerds, Preppies, Greasers, and Jocks) are fighting, while the girls, prefects, Bullies and Non-Clique Students are nowhere to be seen. For the most part, the fighting students ignore Jimmy and Russell, even if they attack them. As long as Jimmy keeps moving Russell will follow him, but if he stops, Russell will attack nearby students, especially Nerds. Having been through the motorcycle crash in Busting In, Part I, Russell is somewhat weaker than usual. He's less aggressive and isn't immune to grapples like he usually is.

Earnest, Bucky, and Donald are vandalizing the gym, they've made a bonfire of mats and trampolines, and put the head of the mascot costume on the end of a pole as part of it. Earnest is wearing an army jacket and a red headband, acting like he's actually at war.

Ted, wearing his football jersey, along with Damon and Bo, are vandalizing the library with spray paint and toilet paper, and have pushed the bookshelves and made a bonfire of some computers and chairs.

Johnny, Peanut, and Hal are vandalizing the girls' dorm. They've spraypainted all over it, including writing "Johnny rulez" and "Pinky, call me!". They too have pushed all the furniture around, although they haven't set any fires. Johnny uses the same fighting style that he used in his boss fight, but has a smaller life bar.

Derby is relaxing inside Harrington House in a smoking jacket, apparently amused by the fighting. Chad and Bryce are with him. He also has Bif's immunity to grapples and large life bar.

Once all four clique leaders are knocked out, Jimmy has to go to the main school building, where Edgar has knocked out Bullies Trent, Ethan and Davis, the same three bullies who "welcomed" Jimmy to Bullworth. Jimmy tells Edgar to go outside and work on calming down the students. Just after Edgar leaves, the prefects Seth and Max tackle Jimmy and confiscate his items. Russell becomes enraged and chases them off, at which point Gary begins to taunt Jimmy over the PA system.

At this point, the mission Final Showdown starts automatically. 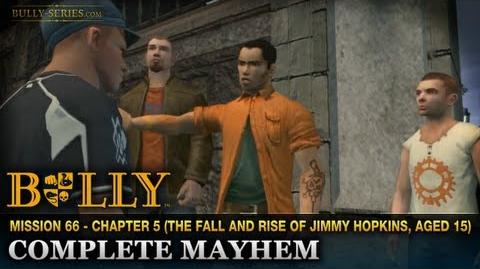 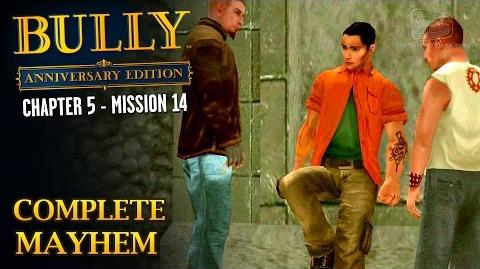