Defend Bucky is a storyline mission in Chapter 1.

Jimmy walks into the TV room in Boys' Dorm and finds Gary teasing Pete. Algie later walks in the conversation and asks Jimmy for help. He tells Jimmy that Bucky has gone to the autoshop to get some parts for his science project, but the Bullies might have gotten to him.

Jimmy asks Algernon why doesn't he go himself. Algie tries to make excuses, but finally then admits that he is scared and that he has a weak bladder. Once Gary has called Algie "Pee Stain" and told him go away, he tells Jimmy to go help Bucky. He declines to go himself, as he is busy 'planning'.

In a limited amount of time, Jimmy must run all the way to the Auto Shop area. The Greasers who usually hang out there are nowhere to be found, but Davis and Wade are tormenting Bucky, while the gate closes behind him. Jimmy takes them down. He and Bucky head towards the garage, but run into Trent and Troy on the way. Jimmy goes through them as well and opens the garage door, so Bucky can get his parts.

On their way out, Ethan and Troy arrive and attack, but Jimmy beats them up too. The gates to the shop have been closed for some reason and Jimmy can't get them open. Just then, the Hobo throws the gates open from the other side and shouts at them to keep the noise down.

Jimmy sarcastically comments that he likes having a crazy man on campus. Bucky gives Jimmy a skateboard as a reward for the help.

If Jimmy fails the mission by letting Bucky get knocked out, a cut-scene shows the gate to the Auto Shop opens and the remaining Bullies run off.

That Bitch and Defend Bucky are unlocked at the same time, when Save Algie is completed. They must both be completed in order to unlock the next mission, The Candidate. 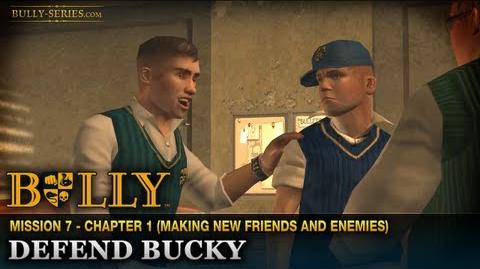 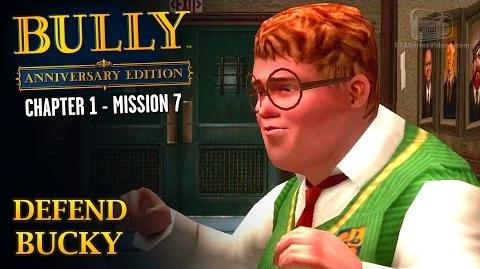