Defender of the Castle is a storyline mission in Chapter 4.

The Nerds are working frantically in the Observatory. The Jocks have found out about the pictures Jimmy took of Mandy in the previous mission, and are prepared to wipe out the Nerds in revenge. The defense system that Earnest used to fight Jimmy earlier is down from where Jimmy damaged it.

Jimmy tells Earnest to fix it while he goes to hold off the Jocks.

Several barricades made of sheet metal and plywood have been set up in the grassy area behind Bullworth Academy. The Jocks are charging and attacking the barricades. Jimmy must knock them out and buy Earnest time to get the rapid-fire spud gun operational.

Generic Jocks Kirby And Dan in football helmets charge the barricade with baseball bats trying to break it down while Bo, Luis, and two instances of Casey throw explosives or use slingshots. Jimmy must knock out all the named Jocks while holding off the generic ones.

After successfully defending the barricade, he heads back to the Observatory, where Earnest has gotten the rapid-fire spud gun working. Melvin will be standing at the gates with Beam Cola for a health refill. Head up to the spud cannon. Again, generic jocks charge the gates leading to the Observatory while non-generic ones throw projectile weapons. Jimmy must knock out all the non-generic jocks while holding off the generic ones. If even a single jock makes it past the observatory gates, the mission will fail.

Once all the non-generic jocks and a certain amount of generic ones have been knocked out, the mission is won. 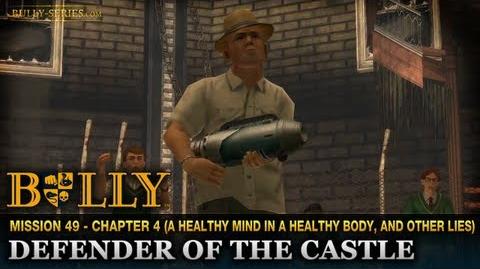 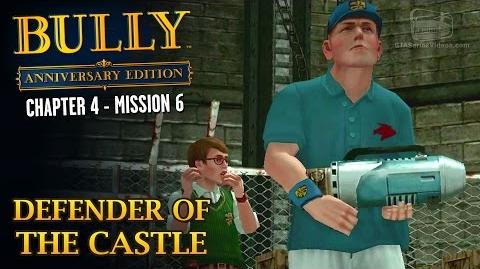 Retrieved from "https://bully.fandom.com/wiki/Defender_of_the_Castle?oldid=80331"
Community content is available under CC-BY-SA unless otherwise noted.