"I know, its funny. I'm the girl in the dirty pictures, ha-ha."
― Mandy Wiles

Discretion Assured is a storyline mission in Chapter 4.

Jimmy sees Mandy sitting at the back of the bleachers in the gym by herself, apparently very upset and he sits down next to her. Unexpectedly, she pours her heart out to him. The pictures that Jimmy took for Earnest earlier in the mission Paparazzi have been blown up into posters and placed around campus and town. Mandy is horribly upset, thinking that now everyone will think she's a slut, and that she'll probably get expelled. When she says that she "probably deserves it", though, Jimmy is moved to pity and agrees to do something about it.

Jimmy has to tag over the posters. He is automatically given spraypaint for the mission.

First, Jimmy has to tag over the two posters on campus. One is on the south end of the main building, where the Bullies Trent, Davis, and Wade are staring at. Jimmy tags over it, causing Wade to insult him. The second one is near the library, with Donald and Algie, who has gotten "mayonnaise" on his pants, staring at it. When he covers it up, they walk away disappointed.

The time limit resets here. Three more posters are in Bullworth Town. One is by the abandoned movie theater, one by Town Hall, and one by Dragon's Wing Comics. The latter is being stared at by Bo and Kirby, who attack Jimmy when he starts to cover it up. The others are being looked at by various Townsfolk.

As soon as Jimmy tags over the first poster, a short cutscene plays. Thad Carlson has several more posters, and he places them over the covered up ones. Jimmy can try to quickly cover them all, as Thad stops once he has done this. He can also look for Thad and then knock him out.

If Jimmy steps inside the store to buy paint, all the posters will be uncovered when he leaves. However, Thad will not reappear once he has been knocked out.

With all the posters covered, Jimmy returns to Mandy. They kiss as the mission ends.

Both this mission and Nice Outfit must be completed to unlock The Big Game. Mandy also becomes one of Jimmy's girlfriends. 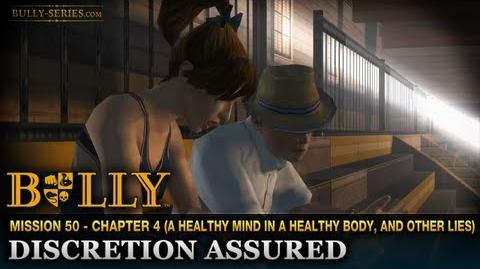 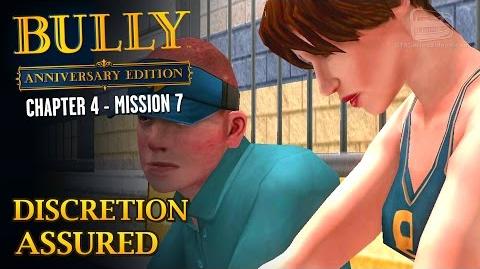