"The thing is if I win, you're just another punk."
— Gary Smith

Final Showdown is the final mission in Bully, as well as the final boss fight. It is available in Chapter 5, and starts automatically after Complete Mayhem.

Leading in from Complete Mayhem, the Prefects Seth and Max have just confiscated Jimmy's slingshot, and then been chased off by Russell.

Right then, Gary taunts Jimmy over the intercom saying "Your attention please: Jimmy is complete human trash." He finally appears, and they exchange insults. Jimmy then gives chase. Gary flees through the door that leads up to the under-construction bell tower.

Jimmy's entire inventory of weapons and items has been taken away. He must chase Gary up the bell tower. It is still full of construction materials and like an obstacle course. Jimmy has to tightrope across planks spanning gaps in the scaffolding, and dodge wheelbarrows full of cinderblocks and other building materials that Gary tries to dump on Jimmy's head. Gary taunts him with a monologue the entire way.

Up on top of the tower, the bells are ringing, and they fall. Once Jimmy has made his way around them, he and Gary have a verbal showdown that ends when Gary insults Jimmy's mother. Jimmy viciously tackles Gary off the edge of the roof, and they land on the scaffolding above the Principal's office.

If at any point Jimmy gets knocked out during this part, he starts at the beginning of the chase.

If Jimmy manages to hit Gary with anything, it causes the mission to fail. This was done to prevent glitches if players used cheat codes to enable Jimmy's inventory. It is occasionally possible to hit him with a brick without cheating, but this still fails the mission.

Despite being the final boss and the main antagonist of the game, Gary is not a tough fighter. He uses straight punches, a kick to the groin and a knee drop to the gut, but he's light. Jimmy can bowl him over with a shoulder barge. He's also not immune to being grappled.

When Gary's healthbar comes very close to being empty, they both fall into the Principal's office, through the skylight.

Dr. Crabblesnitch has been tied to his chair but has heard the entire conversation between Gary and Jimmy. Finally willing to listen to Jimmy, he expels Gary on the spot. Dr. Crabblesnitch credits Jimmy for restoring Bullworth Academy on his own. Jimmy refutes the claim and tells him that he had help. Jimmy then confronts him about his treatment of Zoe after Mr. Burton harassed her, and he fires Burton and re-enrolls Zoe. Jimmy mentions that Pete had helped him, and Crabblesnitch appoints Pete as Head Boy. Finally, Crabblesnitch assures Jimmy that he won't have to worry about the letter to his mother (he never sent it).

As the game comes to a close, the scene fades with Jimmy walking out to the front steps of Bullworth with all the Clique leaders, Russell, Derby, Johnny, Earnest, Ted, and Edgar applauding him, as well as Pete, Mr. Galloway, Ms. Philips, Mandy, Eunice, Algie, and Edna. Zoe comes up, hugs him, and they kiss as the credits roll. 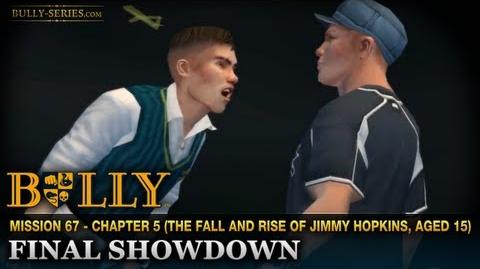 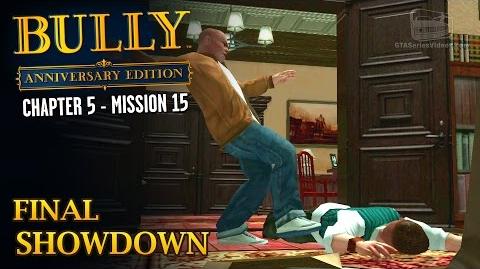