Funhouse Fun is a storyline mission in Chapter 4.

Jimmy heads into the Library to talk to the Nerds. Pete is there and Jimmy greets him, but later ignores him. He asks Algie what the next step in their plan to take the Jocks down is. Algie won't quit talking in very bad Ebonics until Jimmy asks him what the next "quest" is. Bucky and Fatty have taken control of the Funhouse at the Carnival, and are planning to play pranks on the football team.

Head to the Carnival. Entrance is sometimes free for this mission. Head for the Funhouse. At the end of the swirling room, crouch to walk through the small opening.

Things have gone wrong. The Jocks found out about the plan and have taken over the Funhouse themselves. Kirby and Bo are attacking Fatty and Bucky. Jimmy has to rescue them.

The first room, the same one that the Nerds are rescued in, is full of giant furniture, some upside down. The way out is through a suspended ladder. Jimmy must jump up on a table and press a book. The book is easy to see, it's vivid blue, sticks out from the bookshelf and leans at an angle. Pressing the book causes the ladder to drop down.

The next room is a graveyard with grim reaper animatronics that swing scythes. Jimmy must dodge the scythes and get to the control room. Fatty and Bucky run through the maze first. Juri, Dan, and Casey, in that order, follow them. In the control room, Jimmy must control the grim reapers so they take the jocks out with their scythes. Fatty and Bucky run ahead into the next room.

The next room is a maze, and both Nerds have gotten themselves lost. Jimmy must open panels in the walls to get around and collect them both before they can move to the next room.

The next room is a series of L-shaped bends resembling a mine. Miners swing shovels out the same way the grim reapers in the graveyard swung their scythes, however, the range of motion for the miner's shovels is somewhat greater. If you get hit by one, you will be knocked out and fail the mission. Jimmy must cross the obstacle course and then climb up onto the catwalk above it. The miners are operated by control panels, and Kirby, Bo, and Luis are each operating one. Jimmy must turn the panels off so that Fatty and Bucky can cross.

The last room has floor-to-ceiling mirrors in it. Bucky and Fatty are looking at their reflections and dancing. Jimmy leads them down the hall, where they exit into a theater audience as if they'd stepped off stage. Behind the audience is the door out.

Once out, Fatty pays Jimmy for the help.

Both Funhouse Fun and Paparazzi must be completed to unlock Defender of the Castle. 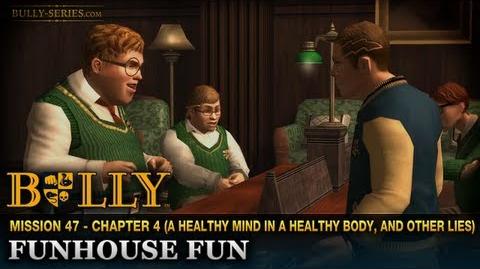 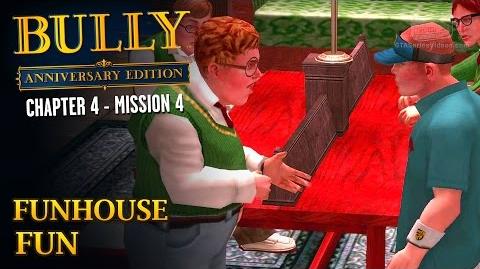