Galloway Away is a non-storyline mission first available in Chapter 4.

Jimmy walks into the art classroom to ask Ms. Philips about where Mr. Galloway has disappeared to. She is evasive and stammers until Jimmy points out that he's had a rough upbringing and she's not going to upset or shock him.

She tells Jimmy that Mr. Hattrick has guilt-tripped Mr. Galloway into admitting himself into the Happy Volts Asylum to get dried out, and he's furthermore told the Orderlies not to admit her to see him, as she's a "bad influence."

Jimmy agrees to bust Mr. Galloway out, and Ms. Philips asks him to meet her by the gate to the Asylum.

First, head to the Happy Volts Asylum. The route is back behind the football field past the Observatory, and is marked on the minimap with yellow X's.

Once Jimmy makes it to the Asylum, a small cutscene where Ms. Philips' car pulls up and she thanks Jimmy for doing this.

Jimmy now has to go into the Asylum and talk to Mr. Galloway. First, head back down the dirt road to the right of the Asylum until he reaches the climbable tree. Use it to get over the fence. As Jimmy lands, Otto (in inmate garb) approaches him and requests that he not anger "The Watcher." The Watcher is a statue in the yard of the Asylum, draped in electric lights. In front of it, there is a red flashing light. Jimmy needs to use his slingshot to knock the light out. The easiest way to do this is to run around behind the storage shed and climb the ladder, then shoot at the light from the roof. Once it goes out, the electric lights covering the statue catch fire. The inmates freak out and the orderlies run to deal with them.

Mr. Galloway isn't deep inside the Asylum. His cell is marked on the mini-map. Jimmy has to duck past the guards and walk into his cell. At this point the mission is won.

Galloway is filthy, wearing a pair of jeans held up by a rope and a dirty white shirt. He isn't enjoying his stay in the Asylum at all, but as he explains to Jimmy, they've helped him come to grips with the fact that he "really does hate himself."

Jimmy tells him Ms. Philips is waiting for him, and encourages him to leave. Mr. Galloway resists at first, but in the end feebly follows Jimmy's order to come on.

This mission must be completed to attempt Cheating Time, but if it is completed in Chapter 4, Cheating Time won't be available until the start of Chapter 5. 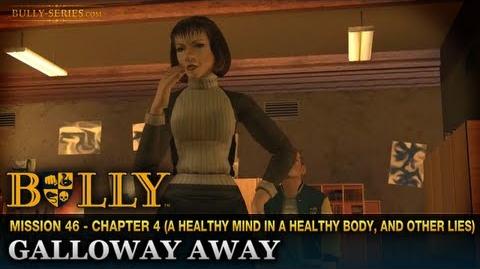 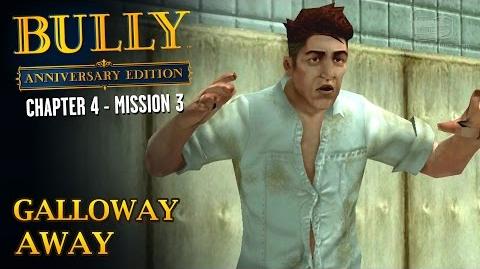