Here's to you Ms. Philips

Edit
watch 01:40
The Sandman Will Keep You Awake - The Loop
Do you like this video?
Play Sound

Here's to you Ms. Philips is a non-storyline mission first available in Chapter 4.

Jimmy walks into the art room, interrupting Ms. Philips, who was in the middle of painting. On his request she shows him the picture - a crudely drawn banana with a cartoon face posing on the same couch she does in art class. Jimmy says that art is lost on him and that he's more into music. Ms. Philips then says some things that don't make any sense to Jimmy. The Greaser Peanut, overhearing, hides behind a desk as Ms. Philips continues to talk.

She finally blurts out that she's in love, and asks Jimmy to help her make the evening extra special, sending him on some errands to pick up a dress, perfume and a pearl necklace. Jimmy, thinking he's just scored a date with a teacher, is very enthusiastic.

Ms. Philips' dress is at the Worn In clothing store in Bullworth Town. As Jimmy stops by the store, Peanut rides up on his bike and attacks. Jimmy does not have to fight him. When he exits, Peanut, Ricky and Lucky are outside waiting for him.

The perfume is at Maria Theresa's salon in Old Bullworth Vale, and the pearl necklace is nearby in the Aquaberry Outlet. Ricky and Lucky will appear and attack each time Jimmy exits a building.

Once he has them all, Jimmy returns to the Art classroom.

In the text data files of the game, there are lines indicating that the mission used to be some sort of direct competition with Peanut to get a gift to Ms. Philips. The text says "Peanut got the Gift. Get it from him before he reaches Ms. Philips", "Peanut beat you to Ms. Philips with the gift", "Peanut has dropped the Gift. Retrieve it and get it to Ms. Philips" and "Get the gift before Peanut gets to it". There is also unused dialogue for this mission which relates to the removed content. It is unknown why the mission was changed.

Both Nerd Boss Fight and Here's to you Ms. Philips must be completed to unlock Galloway Away. 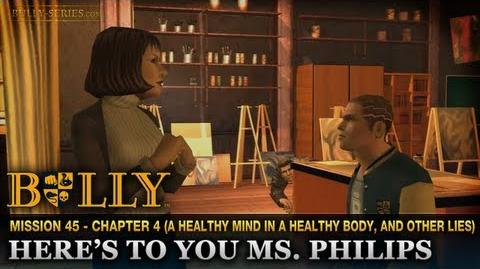 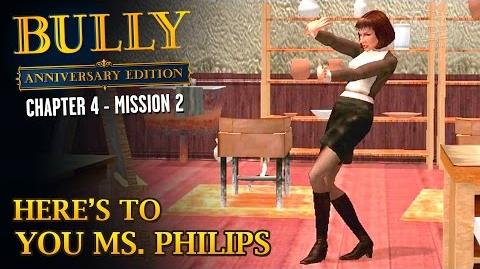