"We shall see, my friend. I only give people what they have coming to them."
— Jimmy Hopkins

James "Jimmy" Hopkins is the playable character and the main protagonist in Bully. He was voiced by Gerry Rosenthal.

Jimmy is 15 years old and is smaller in height than most students, but is reasonably stocky. He has freckles on his cheeks and wears a gold stud earring on his left ear. He also has a ginger buzz cut, and brown eyes. At the beginning of the game, he wears a brown jacket over a white t-shirt, with faded blue jeans and white sneakers. His school uniform consists of a blue Bullworth vest over a white shirt with khaki school slacks. His pajamas consist of a dark blue t-shirt with a flaming yellow skull on the front and on the back that appears to probably be the tag of the shirt, pale yellow sweat pants with undone ties, and white socks. His athletic uniform consists of a yellow t-shirt with the Bullhorns logo and khaki school shorts and sneakers.

Over the course of the game, Jimmy can obtain a wide variety of clothes, haircuts, and tattoos. This allows the player to either have him adopt the look of one of the cliques, or make his own unique fashion statement. He generally wears his clothing more disordered than intended; for example, he wears his school uniform with the collar unbuttoned and unfolded, and his white shirt is untucked. Jimmy's hair is naturally red--when buying haircuts, the red cuts are always cheaper because he doesn't have to pay for dyeing.

In early screenshots, Jimmy was somewhat uglier. He had fewer freckles, a larger and red nose, and ears that stuck out. He also wore gray slacks and boots instead of khaki slacks and sneakers.

Jimmy's only true friend at the school is Pete Kowalski. Jimmy is not always respectful towards Pete, but in the end he defends and sticks up for Pete. In return Pete provides a voice of reason for Jimmy, figuring out solutions to Jimmy's problems when fisticuffs and violence don't suffice.

When Bully was first announced and the first four screenshots were released, it appeared that Jimmy Hopkins (then unnamed) would be a player controlled antagonist, taking the role of the titular bully. Of the four screenshots, one featured Jimmy firing a slingshot, another featured him kicking another student, and the third featured him giving someone a swirly. By the next update on the game, which was a few years later, Jimmy was revealed to be a standad protagonist who stood up to the bullies. It is unclear whether he was originally designed as an antagonist, or if Rockstar released the pictures they did to give a false initial impression of the game to build controversy.

Jimmy was designed to be an everykid. Lead Producer of Bully, Jeronimo Barerra, claimed that what he wanted to do with Bully was to recreate the state of being a kid, and to make it fun.[1]

Parallels were also made between Jimmy and Holden Caulfield, the main character of The Catcher in the Rye. Jimmy and Holden share a background of having a difficult home life and being thrown out of multiple private schools. Jimmy even uses Holden's favorite derogatory term, "phony", to describe his new stepfather.[2]

Jimmy is dumped at Bullworth Academy by his often remarried mother and his new stepfather, who Jimmy describes as a "rich old phony", whilst they go on a year long honeymoon cruise. Jimmy had previously been expelled from seven schools for a variety of reasons which include graffiti, violent conduct, bad language, being disrespectful to staff, and according to small talk, arson. Bullworth is Jimmy's last chance to avoid juvenile detention and, knowing Bullworth's reputation, he prepares for the worst.

Jimmy is slightly undersized, however, his tough childhood has granted him both a level of physical toughness, fighting skill that enables him to hold his own against students larger and stronger than him, and a level of awareness and maturity that most of his peers at Bullworth don't have. Though he's aggressive and quick to fight, he's not truly malicious. As he states early on in the game, "I only give people what they have coming to them."

When dealing with others, Jimmy tends to be rough mannered. He talks abusively to people such as Algie even when helping them. His only real friend at the school is Pete, but Jimmy doesn't treat him with respect either, calling him a dork to his face. Despite this, he seems to have a decent underlying nature, frequently moved to defend people who are weaker than he is. This can be demonstrated when Ted, leader of the jocks, knocks down and steps on Pete, to which Jimmy gets angry and defends him. He also tells off Gary when he was being harsh toward Petey. He helps the Nerds despite his rude treatment of them, and later in the game, he helps Mandy despite the fact that she was antagonistic to him through most of the school year.

Jimmy gets along with any teachers who are willing to treat him with respect, which perhaps surprisingly, is all of them besides Mr. Hattrick. Jimmy also seems to be a talented artist, drawing perfect pictures of Crabblesnitch picking his nose on the Bully Facebook, even though he claims art has never been his thing and that he's more into music. To a large extent, Jimmy's personality within the game depends on the player's control of him. While his actions in the cutscenes are predetermined, Jimmy can deal with situations in different ways. For example, he can order other bullies to leave their victims alone, or he can bully the other kids himself. He can also pay off bullies to leave him alone, or start fights for no reason. His behavior outside cutscenes rarely has long term impact, either good or bad, on gameplay - characters will react to him as his faction standing with them dictates, rather than based on his previous interaction(s) with them. The only time it does have long term impact is that if he kisses someone, he'll have 100% faction with that character for the rest of the game.

During the course of the in-game missions he gains the interest of all the female clique members (Beatrice, Pinky, Lola, Mandy, and Zoe), although the only girls he goes on actual dates with are Pinky and Zoe. He can also kiss one boy in each clique (Trent, Cornelius, Gord, Vance, Kirby and Duncan), but this doesn't come into play in the actual storyline, and the player can choose whether to have him do this or not. The only character Jimmy shows long term interest in, however, is Zoe. The end of the final mission closes with Zoe kissing Jimmy on the steps leading to the Academy.

Although Jimmy's actions after the events of Bully aren't known, Dan Houser of Rockstar Games discussed Jimmy in an interview. He specifically mentioned that he "didn't see" Jimmy turning out to become the type of person who would make a Grand Theft Auto protagonist.

"I never saw him as being that level of degenerate...I saw him as a bad teen, because he comes from a tough home, who could go either direction. He's not going to be a carjacker. He's too white collar for that already. He's at a shit private school, but he's going to end up being really happy because he's at the worst bit of his life, or being a sort of messed up white collar doofus. He was an unpleasant soul, but he had a heart. To some extent you could say the same was true of [Grand Theft Auto 4's] Niko in a bizarre way. But [Jimmy's] not trying to burn down the school, he's more trying to stand up to injustice."
— Dan Houser

As the protagonist, the player controls Jimmy throughout the game and all of the storyline revolves around him. 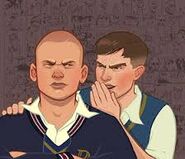