Jock Boss Fight is the boss fight and the final mission of Chapter 4.

This mission follows The Big Game instantly and has no intro.

The mission starts with Ted being protected by Damon, Casey, and Bo. Jimmy cannot use any of his weapons. Someone from the sidelines throws an explosive rigged football to Ted, and he then throws it at Jimmy, intending to hit him.

Jimmy must dodge the footballs and throw them back at Ted. He must first clear the way through Ted's defenders. Bo and Casey will take one hit to be knocked out, Damon however, will take two hits. If Jimmy gets too close, the defenders will tackle Jimmy and then throw him up the field by holding his ankles and spinning, then releasing him. This move does very low damage, however.

If all the defenders go down or if Jimmy hits Ted with a football, Ted will retreat up the field. A brief cutscene shows Damon struggling to his feet and getting ready to continue blocking.

Ted and his defenders reform in the same setup they had before. This time, either Kirby or Dan run in from the sidelines to attack Jimmy. Jimmy must either knock them out or ignore them. Again he must knock out Ted's defenders, causing him to run further up the field, right by the endzone.

Now along with Kirby or Dan, Bo, or Casey join in from the sidelines to attack Jimmy (even though they are the defenders, strangely enough). He must continue to throw explosive footballs at Ted's defenders.

When all the defenders are knocked out, Ted runs. Petey yells from the sidelines for Jimmy to sack Ted, but all he has to do to win the mission is hit Ted once with any move. Ted automatically breaks standing grapples, but can be defeated with a running grapple attack. If for some reason Jimmy decides not to chase him, he'll stop running and start taunting him, but he never tries to fight.

Jimmy stands on the football field and yells that he beat the Jocks in front of everyone. Petey joins him and says in a shaky voice that things are going to be great. Chapter 5 then begins and Blue Skies Industrial Park is unlocked. 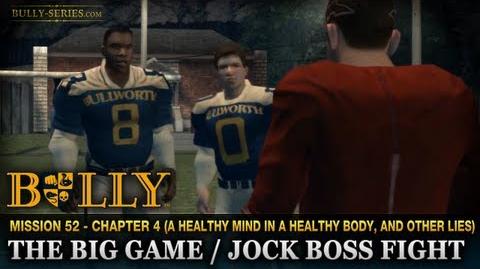 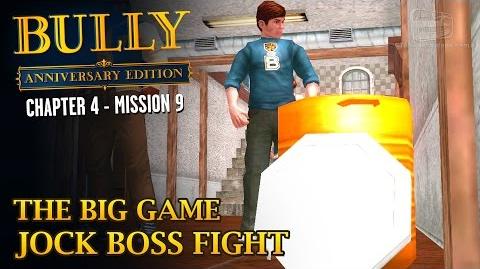