Kissing is a mechanic in Bully with which Jimmy has Girlfriends or Boyfriends and can kiss them for a health bonus.

Without completing Art 1 class, it is only possible to kiss girls which were first kissed during a quest, and kissing them will not give Jimmy any health bonus. So, Art 1 is required to kiss Angie, Christy, and all kissable boys.

Eunice only has one kissing animation, in which she leans clumsily on Jimmy and slobbers on his face, but Jimmy gets all the same bonuses for kissing her that he does with the other girls. Excluding Eunice, all girls have different kissing voices but the same poses.

In the Xbox 360 version of Scholarship Edition, Jimmy will always do a full make-out animation with the girls.

After kissing a character, they will follow Jimmy around for a while until they get bored, if Jimmy gets too far from them, if Jimmy hides or if Jimmy attacks or taunts them.

Certain outfits and pieces of clothing, such as the Black Ninja Outfit or his underpants, will cause other students to laugh at Jimmy. If he's wearing something that makes other people laugh at him, they will ignore him and keep laughing if he tries to ask for a kiss.

If a character who Jimmy has kissed sees him kissing another character, they may attack either Jimmy or the person he kissed, or just run off. Girls will either grab each other's hair and pull, or attack either person with a knee to the crotch or a slap, but guys will start a fist fight, either against Jimmy himself or the character he's kissing, even if it's a girl.

All schoolgirls except the younger ones are kissable: Eunice, Angie, Christy, Beatrice, Pinky, Lola, Mandy, and Zoe. Jimmy can give them either flowers or chocolates, although Eunice will only take chocolates. Jimmy first kisses Eunice, Beatrice, Pinky, Lola, Mandy, and Zoe during various missions, and he kisses Angie as part of a tutorial after completing Art 1. He can go through the entire game without kissing Christy.

It is sometimes possible to kiss clique girls before the corresponding missions, even as early as Chapter 1. To do this, Jimmy's faction standing must be at least 50% and he must pass all the art classes, if Jimmy's faction standing is only 50%, the first kiss can only be attempted at the places except the clique's main hangout spot. Whether she will accept or not is a matter of luck, and factors like location and Jimmy's outfit are thought to be involved. If Jimmy holds a camera when calling a clique girl (not at the clique's main hangout spot), she will be more willing to accept Jimmy's request. If Jimmy's faction standing is 55% or above 55%,the clique girl will give Jimmy her first kiss no matter where she appears.

One boy from each clique can be kissed, those being Cornelius, Trent, Gord, Vance, Kirby, and Duncan. There is only one animation for this. For the first kiss with a boy, Jimmy must have a friendly relationship with his clique (respect above 50%). If Jimmy kisses a boy his faction with that particular boy is set to 100% regardless of his standing with the rest of the boy's clique.

Jimmy can also kiss Mrs. Lisburn after an errand where he helps her escape from the retirement home.

At the Freak Show, if the player targets the conjoined twins or the mermaid, the kiss icon appears, but since they are inaccessible behind glass he can't actually kiss them. This is likely caused by the fact that they are rigged to "Medium" skeletons, the same skeleton as the female students.

If Zack Owens is added to free roam via hex editing, he can also be kissed. He has the same kissing animation as Eunice. 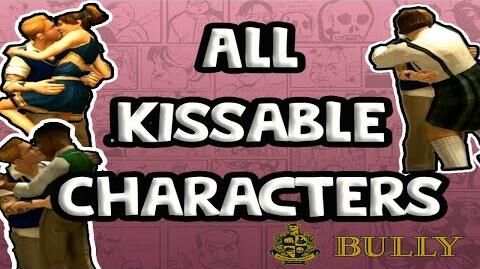