Lola's Race is a storyline mission in Chapter 3.

Jimmy is looking for Johnny Vincent, and has gone to New Coventry. Johnny and Lola are arguing in the street. Lola is acting exceptionally sexual, and while Johnny isn't really buying it, he's having a hard time dealing with it. As Jimmy walks by, she greets him enthusiastically, much to Johnny's displeasure.

Lola begins to compare them, finally referring to them both as "fast". Johnny objects, claiming that no one is faster than he is. Lola gets them to race each other on bicycles.

Jimmy is given a Yellow BMX by default, but can use any bike he wants if he brings it with him before starting the mission. He must win the race to complete it. It can be failed if Jimmy abandons his bike or attacks Lola. Ricky and Lucky also participate in the race. The three Greasers don't try to punch each other during the race, though they'll purposely do it to Jimmy. Lucky and Ricky can be knocked off their bikes. Johnny tends not to get knocked off his, and his life bar is large enough that a full inventory of firecrackers won't knock him out.

The race route goes through northern New Coventry and up onto the train tracks that lead to Blue Skies Industrial Park, where they have to dodge some moving train cars. The route leads back in front of Bullworth Academy, then takes the dirt road south of Bullworth Town. Here, other Greasers are waiting, and they first push over trees and then try to attack Jimmy. The route ends where the race started, in a building in New Coventry.

Johnny blames losing on his bike not being tuned up, and heads to the Shop to tinker with it. Lola, annoyed, decides to make out with Jimmy. 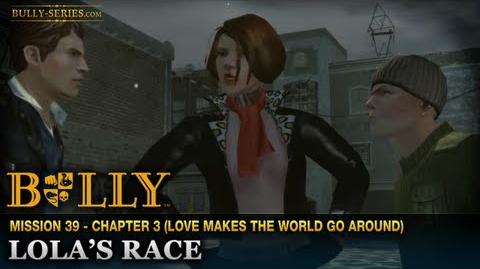 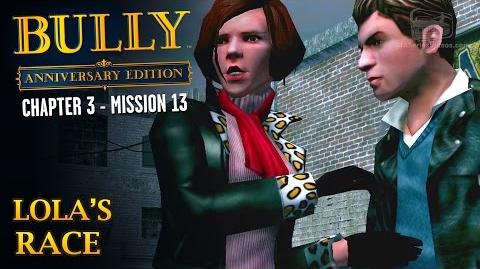