As Jimmy walks through the far eastern section of the residential area in Blue Skies Industrial Park, a large and angry Townie who is wielding a baseball bat stops him. The townie is Clint, and aside from being menacing he's clearly unbalanced. He hits himself in the head with the bat and threatens Jimmy, calling him "rich boy". He repeatedly refers to himself as crazy and throws a rock at something off screen.

Jimmy explains that he's not rich and he hates the Preppies. Clint sends him on an errand to Old Bullworth Vale, explaining that either Jimmy wrecks some mailboxes or Clint wrecks him. He gives Jimmy the bat.

Jimmy starts on the bridge leading from Bullworth Town to Old Bullworth Vale. There are 20 mailboxes that Jimmy must smash in a time limit. He is given Clint's baseball bat and a bicycle.

Hitting a mailbox is considered vandalism, but he is unlikely to be bothered by any policemen. One of the mailboxes is in front of Tad Spencer's house, where a bunch of Preppies are loitering. Jimmy can either fight them off or just bike away from them. If the time is after curfew (11 p.m.), the Preppies won't be there.

Once Jimmy has smashed all 20 mailboxes, a cutscene with him and Clint in the Blue Skies Residential Area plays where Clint declares him "alright". 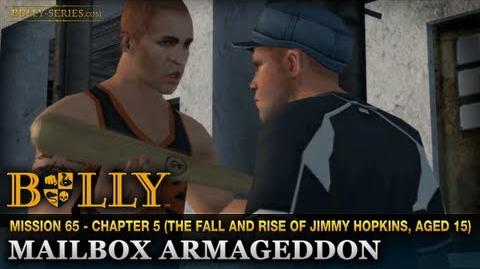 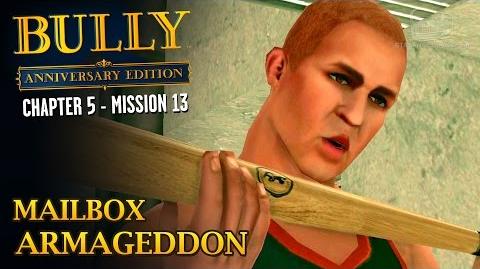