Making a Mark is a storyline mission, and the first mission available in Chapter 5.

Jimmy is hanging out in the Boys' Dorm with Earnest, Derby and Ted. A highly agitated Pete comes up and requests Jimmy's attention, but is rudely dismissed. Derby flatters Jimmy, telling him the whole town needs to know about him, and encourages him to go to city hall. Ted likes the idea and suggests that Jimmy take a dump on the doorstep, but Derby's actual plan is for Jimmy to spray paint the building.

Jimmy leaves, and Petey tries to remind him about Gary and runs after him, but isn't able to stop him.

If Jimmy doesn't have any spray paint at the beginning of the mission, he must either find or buy some. It is cheapest to just pick up the can just north of the Boys' Dorm.

Get to Town Hall. To the right of the building is a ladder that will lead up to the roof. The first part of the roof has some external air ducts and another ladder. This second ladder leads up to a small ledge that has a rubber band on it and a third ladder. The third ladder leads up to a ledge from which Jimmy can reach the part of Town Hall that overlooks the town.

He must lay three different tags. They combine to spell the word "BullWorthLess". Once the tag is laid, Jimmy's trouble meter goes to orange.

Now, he must take a photo of the tag. It is easiest to empty the trouble meter by hiding in a garbage can than to try and take it with the police after him. On taking the picture, he heads back to school.

Jimmy is met as he arrives back on campus by Pete. All hell has broken loose while he was gone. Not only do all the cliques want to fight each other, but apparently they think that Jimmy failed in his promise to bring peace to the school. His standing with everyone in the school except the Bullies has plummeted. 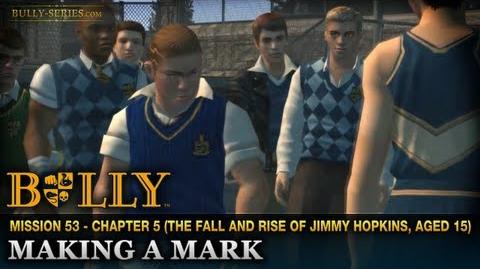 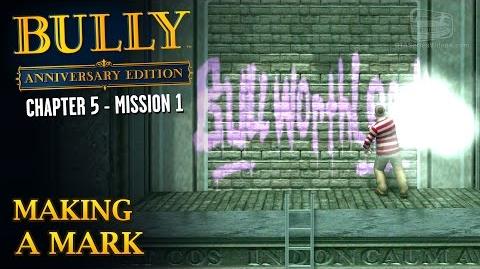