"He obviously has the hots for me. Not that I can blame him, I mean who doesn't, right?"
— Mandy

Mandy Wiles is a character in Bully, and is a member of the Jocks at Bullworth Academy. She was voiced by Elena Franklin.

Mandy is a cheerleader, and is rarely seen not wearing her blue cheerleader's outfit. During winter, she wears a white-gray sweater, indigo gloves and blue tights. She has brown hair, and wears it in a high ponytail with a navy blue bow. Additionally, she has brown eyes. She can occasionally be seen in the Girls' Dorm wearing basketball shorts and a gray t-shirt as pajamas.

Mandy is the leader of the school's Cheerleading Squad, and the self-proclaimed and acknowledged all around queen bee of the school in general. She dates Ted and considers herself the most popular and best-looking girl in the school. She's condescending and nasty to people who aren't socially prominent enough for her tastes. It is assumed during Discretion Assured that Mandy and Ted broke up. Beneath that, however, she's insecure, even admitting it at one point. She constantly bullies Beatrice both verbally and emotionally and refuses to let her on the cheerleading squad. However, Angie claims that Mandy is really a nice person, despite her nasty side. According to unused dialogue, she and Zoe used to be friends.

Mandy hopes to become a model and rumours abound that she has an eating disorder, presumably bulimia nervosa, and throws up to stay thin. She also seems to have a slight crush on Johnny, as she calls him cute and wonders what it's like kissing him. Mandy also wonders why Johnny dates Lola, whom she dislikes, and with whom she has a rivalry, calling her a "tramp." Occasionally she can be seen holding hands with Kirby and Dan. There is a good deal of small talk about Mandy's alleged promiscuity, like Russell claiming that she let him see her belly button, but there doesn't appear to be any real evidence of it. On top of this, she is described by Ms. Rushinski as a "church going girl".

Although she's rarely seen inside the school building, she attends the same Art class as Jimmy.

Jimmy first crosses paths with Mandy in Chapter 1, when he sneaks into the Girls' Dorm and hears Mandy and Beatrice arguing in the mission That Bitch. Mandy had stolen Beatrice's chemistry notes, and Beatrice hires Jimmy to get them back. On the advice of Gary, Jimmy leaves a stink bomb in Mandy's locker, which causes her to vomit when she opens it. She spectates Jimmy's fight against Russell in the Hole with Ted and Damon during the mission Help Gary.

During Chapter 4, Earnest tells Jimmy he needs lewd pictures of Mandy for part of his plan. However, he only wanted them for personal use. Later the photos get enlarged and put over the town as posters. Jimmy encounters Mandy upset on the bleachers and feeling sorry for her, agrees to cover them up, thus winning her over.

After the feud with the Jocks, Mandy and Jimmy start a relationship and she even kisses him on the cheek when he becomes king of the school, but it seems to be not that serious, since Jimmy flirts with Christy as soon as Mandy walks away. When all the cliques turn on Jimmy, his and Mandy's relationship dissolves. Although due to game mechanics she'll still act friendly towards him, the dialogue indicates that she is actually angry with him. She also claims that Gary "was right about that Hopkins creep."

Mandy's last major role is in Chapter 5 when she's caught inside the gym when Gurney sets fire to it, and Jimmy rescues her. During the ending credits, Mandy can be seen cheering for Jimmy with the rest of the crowd after he restores order to the school.

During the non-storyline mission Panty Raid, Mandy can be seen along the crowd in front of the Girls' Dorm, wondering if the football team caused the commotion. During Cheating Time, she and Casey buy math test answers off Justin.

As another attempt to bully Beatrice, a note is posted by Mandy saying Beatrice didn't make the cheerleading squad again.

Mandy threatening Beatrice in "That Bitch". 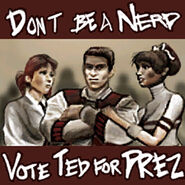 Mandy on one of Ted's school presidential campaign banners

A beta version of Mandy