Nerd Boss Fight is a storyline mission in Chapter 4. It starts automatically after the previous mission, Stronghold Assault.

Earnest has transformed the inside of the Observatory into a stronghold. He stands up on an inaccessible catwalk. Jimmy at first tries to reason with Earnest, but Earnest won't hear it. He says he's tired of "friends" like Jimmy who pick on them constantly. Ignoring Jimmy's response, he opens fire with an automatic potato gun much like the one outside.

This boss fight is split into 3 parts. Earnest is up on the catwalk, the railings of which prevent Jimmy from shooting at him directly. Down on the floor where Jimmy is, there are pillars he can duck behind to avoid Earnest's attacks.

The first part has Earnest firing at Jimmy from a rapid-fire spud gun. Jimmy has to shoot the machines that hold the catwalk up. Once they've been damaged, part of the catwalk drops away.

Earnest then begins throwing firecrackers with a delayed explosion. Again, Jimmy has to shoot at machines holding up the catwalk to stop him.

The final part has Earnest take a hand-held Spud Gun and fire at Jimmy. Jimmy shoots at more machines, and this time Earnest comes crashing down with the catwalk.

Earnest cowers, sure that Jimmy's going to beat him up. He hands over the spud gun. Jimmy helps Earnest to his feet and again asks for his help. Earnest agrees to help him, although he does make it clear he's only doing so because he has no other choice.

Both Nerd Boss Fight and Here's to you Ms. Philips must be completed to unlock Galloway Away. 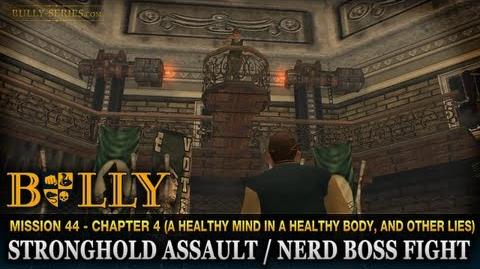 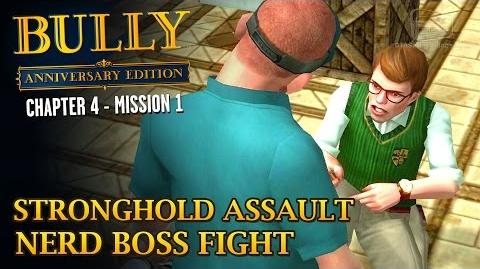