"Sometimes ya' just gotta take the bull by the horns."
— Jimmy Hopkins

Nice Outfit is a storyline mission in Chapter 4.

Jimmy meets Earnest in the Observatory to continue their work against the Jocks. Earnest has come up with a new plan. He delivers a monologue that starts with gushing over his genius, moves to ranting about how he hates the Jocks, and finally to how he will rule them. This last bit he amends to say that they will rule, Earnest being "Merlin to [Jimmy's] King Arthur".

Finally, Earnest explains that he needs Jimmy to go get the Mascot outfit from Constantinos. Since Constantinos is unlikely to give the outfit to Jimmy, Jimmy has to figure out a way to take it from him.

Head to the football field. The team is practicing and the mascot is running around the field entertaining the team. Jimmy has to annoy him until he attacks. This can be done in a few ways. Jimmy can throw loose balls, trip the Mascot with marbles (which can randomly raise the bar to maximum), or simply attack him. An easier way is to sit in the tree near the Observatory and use the slingshot to pelt the Mascot. In this way, Jimmy is unable to be attacked. The Mascot has a meter for his annoyance. Once it's full, he gives chase.

A few of the Jocks, lead by Bo, give chase as well. Jimmy leads the Mascot to the swimming pool. As the Jocks try to follow, Earnest and the Nerds, who were on the roof of the pool building, open fire with bottle rockets and spud guns, preventing them from following.

Jimmy fights the mascot in the empty pool.

The Mascot has a fairly damaging fighting style. His main attack is swinging punches that look much like the ones the Bullies use, however, the Mascot's punches connect with the knuckles rather than the flat of the hand. He also uses a shoulder tackle from a standstill that can knock Jimmy over if it connects, as well as a field goal kick to the groin that connects regardless of whether Jimmy is blocking. He is however, not immune to grapples.

At a few points in the fight, the Mascot will stun Jimmy with a headbutt, then back off and try to charge him. Jimmy has to recover from the stun in time to dodge. If he doesn't, the mascot tackles him into the wall of the pool for major damage. If he does, the Mascot runs head first into the wall. Even if Jimmy does not get up after the mascot has headbutted him, he may still dodge the mascots tackle by quickly moving out of the mascots way, as soon as the player get the controls again.

If Jimmy wins, he quips "Sometimes you just gotta take the bull by the horns" and takes the costume, leaving Constantinos in his undershirt and boxers and sporting a black eye.

After the mission ends, the nerds who were on the gym roof are now in front of the gym fighting with the Jocks. If Jimmy doesn't help them they'll get beaten up, although there's no reward for saving them or penalty for abandoning them (or even attacking and beating them up).

Both this mission and Discretion Assured must be completed to unlock The Big Game. 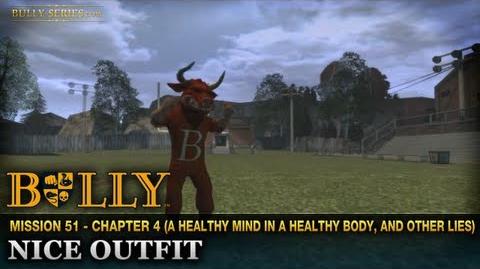 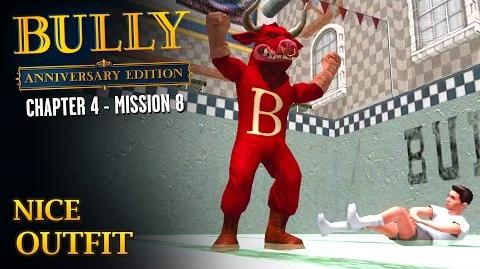