Edit
watch 01:36
We're Getting Mutants in the MCU - The Loop
Do you like this video?
Play Sound
This article features content exclusive to the Scholarship and Anniversary editions of Bully. This feature is not available on the original version of the game.

"Well, we are about to go on onstage in a couple of minutes, but our lead percussionist has appendicitis..."
―Miss Peters

Nutcrackin' is a Chapter 3 mission exclusive to Scholarship Edition and Anniversary Edition.

Miss Peters is in the hallway, pacing back and forth. She spots Jimmy and launches into a speech about the holiday season pageant she's putting on, and how the whole thing is about to be ruined because one of her percussionists has appendicitis. She begs Jimmy to take his place and "save the Christmas pageant". Jimmy tries to refuse on the grounds that Christmas pageants are for the little kids and this will be so humiliating for him that it will put him in therapy. Miss Peters then threatens to fail him in Music class if he doesn't perform.

Out on the stage, Jimmy is forced to dress up as The Nutcracker and play the xylophone. Some of the non-clique students can be seen as well - Pedro and Melody are dressed up as flowers, and Eunice is dressed as a fairy. Pete is also dressed as a nutcracker, and is playing the timpani drum next to Jimmy.

The mission works the same way as Music class. Prompts scroll from the top of the screen to the bottom, and the player must match them as they pass through boxes near the bottom of the screen.

After completing the mission, Jimmy will always be wearing his school uniform. He gets $20.00 as a reward and unlocks the Nutcracker costume for his wardrobe. 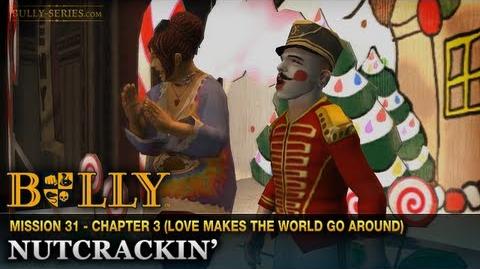 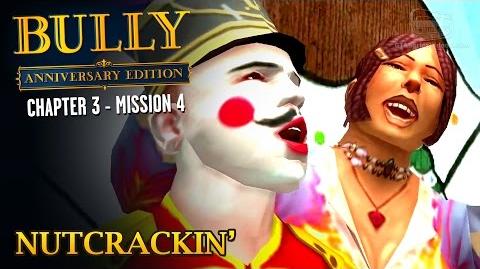