Panty Raid is a non-storyline mission that first becomes available in Chapter 2.

Jimmy is walking in Bullworth Town, when he sees Mr. Burton, poorly disguised with a pair of shades and a fisherman's hat, walk out of Come Hither, an adult store. Burton attempts to claim he was making sure no students were in the store, but he actually says "I was looking for naughty boys." Jimmy, however, goes along with him, agreeing that "that stuff can rot a young man's mind."

Burton then asks Jimmy to help him collect the "laundry" he forgot to collect. This turns out to be underwear from the Girls' Dorm. Jimmy agrees to go fetch some, and Burton claims that if Jimmy's caught, he knows nothing.

Jimmy must make his way into the girls dorm by climbing up the ladder on the northern edge and into the attic. From there, he makes his way down into a storage room, where he can overhear a conversation between Angie and Christy. Mrs. Peabody is patrolling the halls, and Jimmy must avoid her - if she catches him, he is automatically thrown out of the dorm. He has to collect five different pieces of underwear, presumably from Angie, Christy, Pinky, Lola and Mandy.

After getting the last piece, he's spotted by Melody, who panics. Despite Ms. Philips asking the girls to stay calm, Melody pulls the fire alarm, setting off the sprinklers. The door to the storage room is locked, and Jimmy must find a way out of the dorm.

If Jimmy runs into the crowd in front of the dorm and waits too long, Mrs. Peabody will come outside and Jimmy will get a red trouble meter. He can opt to try and outrun the authority figures. He can also take the side door at the end of the first floor hallway and avoid the crowd.

Once Jimmy takes the panties to Mr. Burton, who is waiting at the school gates, the mission ends.

If Jimmy pulls the fire alarm on his own any time before Melody pulls it, he blows his cover and the mission is failed. 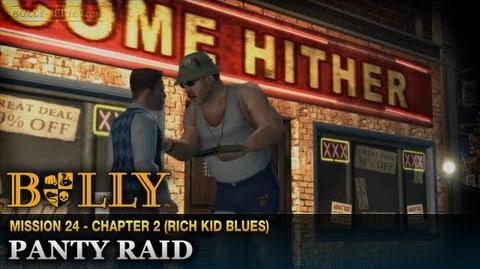 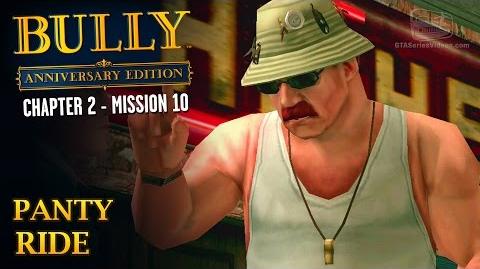 Retrieved from "https://bully.fandom.com/wiki/Panty_Raid?oldid=82003"
Community content is available under CC-BY-SA unless otherwise noted.