Preppies Vandalized is a mission during Chapter 5.

Jimmy turns up at the Glass Jaw Boxing Club to find Derby, Bif and Gord complaining that their boxing trophies have been stolen, and the cabinet wrecked. They blame Jimmy, saying that Derby is a more appropriate leader of the school.

Jimmy tries to calm things down but the Preppies blame the Greasers and prepare to fight them in New Coventry. Jimmy manages to stop them and goes to look for the trophies himself.

Jimmy must travel to New Coventry and find Vance. Vance is waiting in an alley near the Tenements with Norton and Peanut. He tells Jimmy that after all the trouble the Townies caused, the Greasers now consider them, rather than the Preppies, their arch-enemies, and that the Townies stole the trophies. He also says that Johnny says Jimmy isn't welcome in New Coventry anymore, but lets him walk away for helping him out of the asylum.

Jimmy then heads to Spencer Shipping Warehouse. Otto and Jerry are patrolling the ground floor. On the second floor, Duncan is putting rats in a crate while Leon watches. Jimmy overhears Leon remind Duncan that they have to be on time for a party at the docks. He snaps a picture of the two. After he snaps the picture, they both come towards him at a run, and he has to make sure they don't see him if Jimmy is seen the mission is failed.

Heading to the docks, the Townies have moved out onto an offshore barge and made a bonfire with the trophies. As he approaches a short cutscene plays where Henry dumps a canister of gasoline onto the trophies and then jumps back as it ignites. Jimmy takes a picture of the scene, the trophies burning and the Townies standing around, headbanging and throwing up the devil horns sign like they were at a heavy metal concert.

Upon returning to the boxing gym, Derby and Bif ask Jimmy who stole the trophies and he claims the Townies did it. The duo then question him as he points out that they were responsible for the previous incidents that Jimmy was blamed for. After claiming it was because of Gary, the duo insult him and leave, not even bothering to look at the photo he took for them. 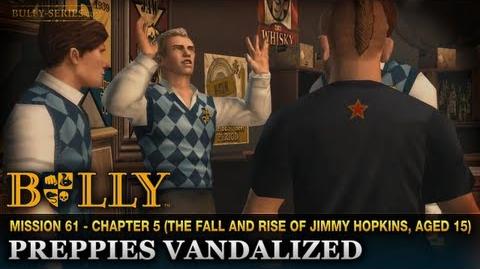 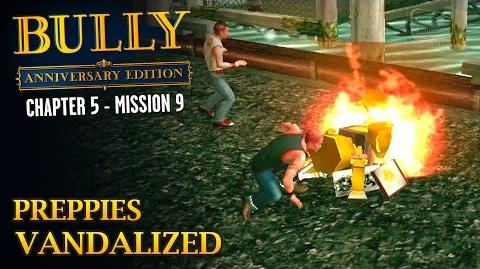