Rats in the Library is a storyline mission in Chapter 5.

Jimmy finds Earnest, Beatrice, Algie, Melvin and Cornelius are standing in front of the library, afraid to go in. The library has been infested with rats, and they blame Jimmy. Algie is angry because he has to study for his "pre-pre-pre med test" next week, and he misses the old days, when the Nerds were "...bullied mercilessly by everyone, but they could at least study in peace".

Just then, a rat runs out of the library and all the nerds jump on Jimmy. Algie pees himself to everyone's disgust. He tries to insist it's just spilled soda as Jimmy, disgusted, calls the Nerds pathetic and enters the library to kill the rats.

Jimmy has a time limit in which he has to kill 20 rats or fail the mission. Mrs. Carvin the librarian is standing on a desk, petrified, and asks him to kill them.

The most effective weapons for killing rats are the slingshot and stinkbombs. Surprisingly the stinkbombs kill any rat that gets within the radius. He fails the mission if he attacks Mrs. Carvin.

Mrs. Carvin tells Jimmy to checked the book crates that were delivered from Spencer Shipping Warehouse for more rats lurking there. He checks and finds that that is where they came from, but there aren't any left. She thanks him and agrees to waive any library fees he has acquired, which he sarcastically thanks her for.

Both this mission and The Gym is Burning must be completed to unlock Finding Johnny Vincent. 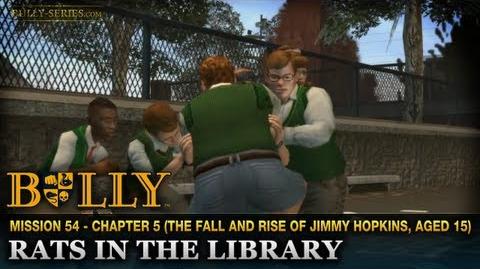 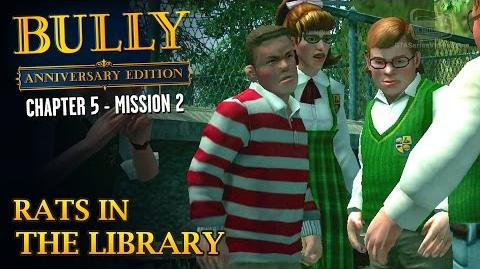