Revenge on Mr. Burton is a storyline mission in Chapter 5.

As Jimmy is walking through the small residential area in Blue Skies Industrial District, he sees a girl on the porch of one of the houses. They nearly fight, but for once in his life, Jimmy apologizes, and instead introduces himself.

The girl's name is Zoe. She tells Jimmy she used to go to Bullworth. She was harassed by Mr. Burton, and when she complained about him she got expelled. They quickly make a plan to get revenge on him, by pranking him while he's in the port-a-potty in the park in Old Bullworth Vale.

First, Jimmy has to pick up a pair of boltcutters from the Spazz Industries shop in Bullworth Town. Then, he has to meet Zoe in the park in Old Bullworth Vale.

Zoe is waiting by a port-a-potty that is right on the edge of a hill. Jimmy hands over the boltcutters, and she sends him to go bust up the other port-a-potties so Burton has to use the one by the hill. The boltcutters are to cut the chain anchoring the port-a-potty to the ground.

This part of the mission is timed. Mr. Burton is running around the park, and Jimmy must both finish before he's done his run, and avoid getting seen by him if he is caught the mission is failed. There are three port-a-pottys in all, and they can be busted with punches. One is being guarded by a dog. As Jimmy's faction standing with the Preppies is very low, if any of them see him they'll attack him on the spot.

Once he's broken the port-a-potties, Jimmy heads back to Zoe. Burton runs past them and into the port-a-potty. Zoe uses the boltcutters to cut the chain holding it in place, and Jimmy jumps in a lawnmower and rams it. It topples down the hill and Mr. Burton staggers out, covered in excrement. 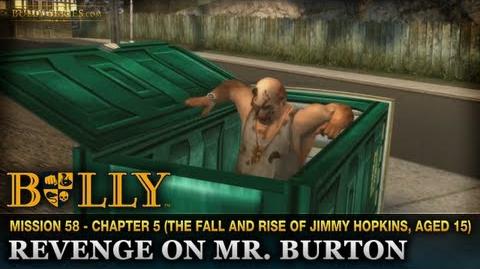 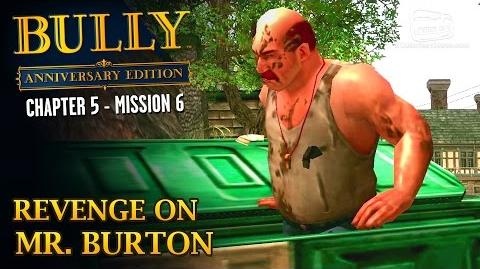