Russell in the Hole is the final mission of Chapter 1 and the first fight with a clique leader in Bully.

Starting instantly after Help Gary, Gary has led Jimmy to The Hole, which is a concrete octagonal fighting pit, and once there, Gary turns his back on Jimmy, claiming that he is backstabbing Jimmy before Jimmy gets a chance to do the same to him. He has gathered members of all the cliques as an audience, and imitating a sports announcer, he introduces Russell to them. He tells Russell that Jimmy made remarks about his (Russell's) mother and barnyard animals, and Russell attacks in a rage.

Beating Russell is the only goal in the mission.

Russell uses a different fighting style from his usual, using many Pro Wrestling moves. He uses a back fist, a clothesline and a double axehandle in addition to his usual Powerbomb. He also charges Jimmy head first to spear him into the walls of The Hole. About two thirds of the way through the fight he automatically tackles Jimmy and tries to put him in a Boston Crab. He will also interrupt Jimmy's punching and grappling combinations by thrusting his chest out, knocking Jimmy back and damaging him.

Russell occasionally stops to pose during the fight, which gives Jimmy openings to hit him. When he charges head first, Jimmy can also dodge so that Russell runs headfirst into the wall, damaging and stunning himself. It is very rare to be able to grapple him, and even when held, Russell will break out with ease. If a knee drop is attempted on him, he'll always reverse the grapple.

A common strategy to defeat Russell is to avoid him by running around the perimeter of the Hole, and shooting at Russell with a slingshot while dodging his tackles.

After Jimmy wins the fight, Gary delivers another monologue about taking over the school and calls Jimmy a liability. He then leaves, saying "See you around, moron" over his shoulder. Petey, who wasn't present during the fight, shows up and tries to get a round of applause for Jimmy, to no avail.

Jimmy helps Russell back to his feet, tells him that he never insulted him or his mother and orders him to leave him and Petey alone, which Russell agrees to do.

If Jimmy is knocked out during the fight against Russell, a short cutscene with Russell screaming "ME RUSSELL!" while standing over Jimmy plays, and then the mission restarts at the boss fight instead of returning Jimmy to the dorm or nurses' office. 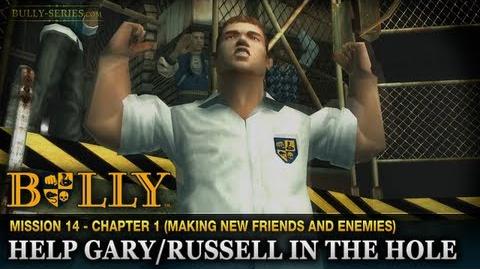 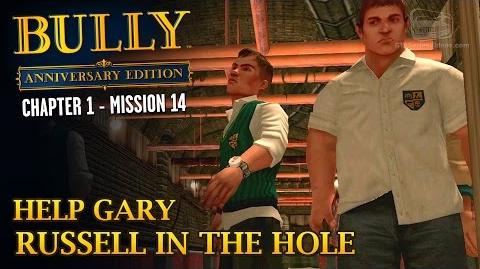 Retrieved from "https://bully.fandom.com/wiki/Russell_in_the_Hole?oldid=78273"
Community content is available under CC-BY-SA unless otherwise noted.