The School Basement is the basement level of the Main Building. It is most notable for being the location The Hole and the mission Help Gary.

The school basement has two entrances and one exit, one being a door labeled boiler room next to the school store, the other being an exterior entrance next to the School Parking Lot. These two ways become available after the mission Help Gary is completed. Also, there are breakable boxes in the basement that contain a variety of weapons such as bottle rockets and spray cans, the only time players can access the interior in free-roam is by modifying the game via a hex editor.

The Basement can be divided into four sections:

The boiler room is, as the name suggests, the room holding the school boiler. One of the Transistors is located here, and the fire in the boiler can be put out using a fire extinguisher. Any pumpkins left after Halloween will be found here.

This room has the one door that is an exit, leading into the school. It's at the top of a staircase leading from the boiler room. Another staircase lead from this room to the hole.

The Janitor's Office is the location of the toilet paper in both "bog roll" errands.

The storage rooms comprise of most of the basement. They are essentially rooms of shelves lined with boxes, televisions and other things. The storage rooms are useful because of the boxes. Breaking all or most of the them can almost completely refill Jimmy's Inventory to maximum capacity on all items. Faint radio music can be heard throughout the storage rooms.

A small living corner with a radio, television and other props can be found in the basement. The title of the radio music playing suggests that the room would have been a spawn point for Mr. Luntz; he was meant to spawn at night in the Basement.

There is an elevator in the basement that was originally was supposed to be used by Jimmy to gain access from the basement to the roof. This was cut for unknown reasons. In the final game, the elevator is broken down and unusable. 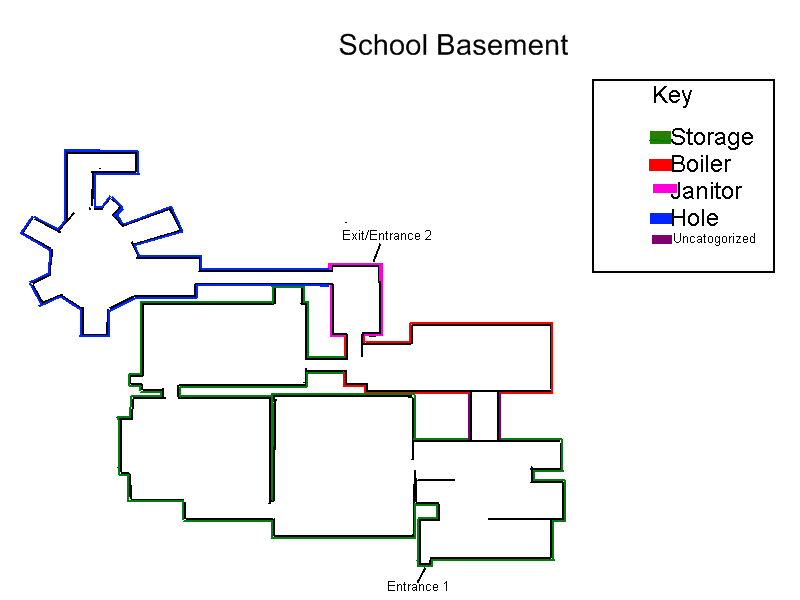 Retrieved from "https://bully.fandom.com/wiki/School_Basement?oldid=78634"
Community content is available under CC-BY-SA unless otherwise noted.