Slingshot is a storyline mission in Chapter 1.

The mission starts in the TV room of the Boys' Dorm where Gary is, as usual, hassling Petey. Jimmy enters the room. Gary first gets Jimmy angry when he requests that he "leave the thinking up to him", and then gets Jimmy angry at Petey by claiming that Petey said Jimmy was dumb. When Petey protests, Gary calls him a liar and kicks him in the balls. He then tells Jimmy he wants to see how good he is with his new slingshot, and they leave without Petey.

Gary leads Jimmy to the School Parking Lot, where Gary asks Jimmy to shoot out the windows of the broken down bus. After Jimmy does so, Gary leads him to the Football Field, where Mr. Burton is currently running football practice for the Bullworth Bullhorns. Jimmy climbs a tree while Gary sits in the bleachers. Jimmy uses his slingshot to shoot at the Jocks. When they are all knocked out, the mission is complete. 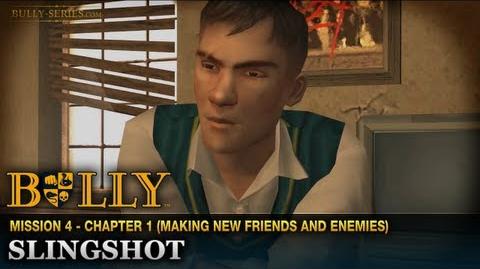 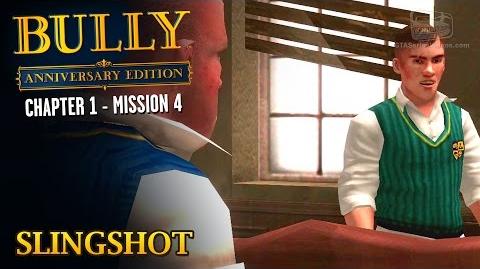