That Bitch is a storyline mission in Chapter 1.

Jimmy wanders into the Girls' Dorm to overhear an argument between Beatrice and Mandy. Mandy has stolen Beatrice's lab notes, and easily pushes her around when Beatrice tries to take them back. With no one else around, Beatrice begs for Jimmy's help. When her offer of giving him a kiss doesn't appeal to him, she threatens to tell the whole school that he's a sad sicko who likes to spy on girls changing in their dorm. Jimmy agrees to get the notes back.

Jimmy meets Gary beside the Girl's Dorm and tells him about his plan, and Gary suggests him to leave a stink bomb in Mandy's locker. Jimmy heads to the Library, where he finds Fatty playing Grottos and Gremlins. Jimmy can either buy a stink bomb or bully him for one. He can also pick up stink bombs that spawn around the school or make some with his chemical set if he has already passed Chemistry 2.

Jimmy arrives in the girls locker room under the Gym. Pinky, who was in the locker room, screams and runs to get the prefect Seth Kolbe. Seth goes to investigate, forcing Jimmy to hide. Once he's gone, Jimmy picks the lock to Mandy's locker and throws the stink bomb in. Mandy shows up and opens her locker. The stink bomb goes off, causing Mandy to run to the toilets to vomit.

Taking the lab notes back to Beatrice, Jimmy is rewarded with a kiss and her affection.

If Jimmy has stink bombs in his inventory when he starts the mission, he skips the meetup with Gary and exchange with Fatty, heading straight for the gym instead.

Defend Bucky and That Bitch are unlocked at the same time, when Save Algie is completed. They must both be completed in order to unlock the next mission, The Candidate, and the side mission The Diary. 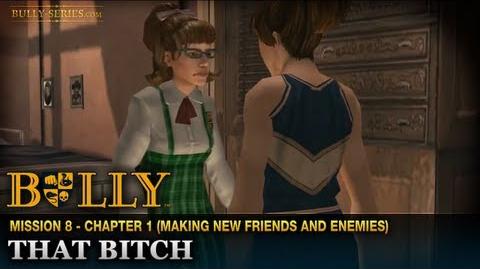 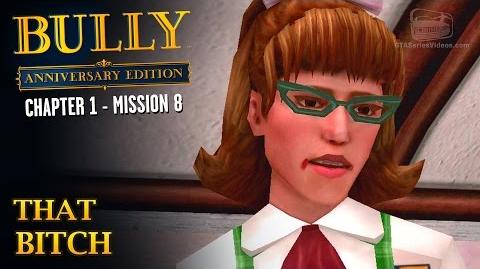