Edit
watch 01:36
We're Getting Mutants in the MCU - The Loop
Do you like this video?
Play Sound

"I've always been a politician at heart."
— Jimmy Hopkins

The Candidate is a storyline mission in Chapter 1.

The Mission starts with Earnest is setting up a poster advertising his campaign for class president against Ted Thompson. He's interrupted by Damon and Juri. Damon rips the poster up and Juri gives Earnest a wedgie.

Realizing that he'll lose the election without defense from the Jocks, Earnest hires Jimmy to protect him during his presidential speech. He gives Jimmy a "super-slingshot", a slingshot with a scope attached, to protect him.

The mission is a chance for Jimmy to learn to use the Sniper Slingshot.

First, he has a short time limit to get to the entrance of the AV Room, which is on the second floor near the trophy case. Once he arrives, he takes a seat in the balcony of the auditorium.

The Jocks, excluding Damon and Ted, intend to disrupt Earnest's speech by throwing eggs at him. They appear from 9 different locations. Four box seats roughly at Jimmy's height, the aisles leading towards the stage, the left and right backstage areas, and the catwalk directly above the stage. Various students are sitting in the audience watching. The Nerds present cheer Earnest, but the Jocks, Greasers and Preppies present shout catcalls at him.

A meter representing Earnest's poise appears. If it falls to empty, the mission is failed.

Jimmy has to hit each Jock with a slingshot shot before they throw their eggs. Each jock only takes a single hit with the slingshot to drive off. If the eggs hit Earnest, he stops his speech and whines that it's unfair while losing a small amount of his poise meter.

Late in the speech, the Mascot appears from the right hand backstage wing. He walks onto stage and if given enough time, begins to perform the Cow Dance. Earnest's poise meter slowly but continuously drains while the Mascot is on stage. The mascot requires multiple slingshot shots to drive off.

There are loudspeakers at the edges of the stage. They require a fully charged slingshot shot to break and breaking all of them also fails the mission. This is more of an easter egg than a hazard, as the game does not tell you the speakers are breakable and it actually requires effort to break them all before the Jocks drain Earnest's poise.

If Jimmy fails by either letting Earnest get harassed or knocking out the speakers, Earnest whines that he gives up and walks off stage. Regardless of what time Jimmy started the mission, it will always be 6:45 p.m. after the mission is failed or completed.

If he succeeds, he earns the sniper slingshot to keep, the regular slingshot is removed from his inventory, and the clock disappears. Halloween does not automatically start however, and Jimmy briefly has unlimited time to wander the campus.

To the frustration of many gamers, the winner of the election is never announced. However, it is most likely that Ted won. If every student in the audience voted based on whether they were cheering or booing Earnest, and including Earnest's and Ted's own votes, the votes would have gone in favor of Ted 9-6; if Earnest bought Jimmy's vote that would still only bring the tally to 9-7. Also, Earnest's speech revolves around giving Bullworth Academy an all-academic curriculum, but later in the school year Mr. Burton is canceling field trips so the athletic department gets more money. 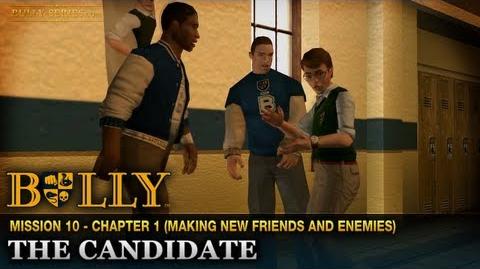 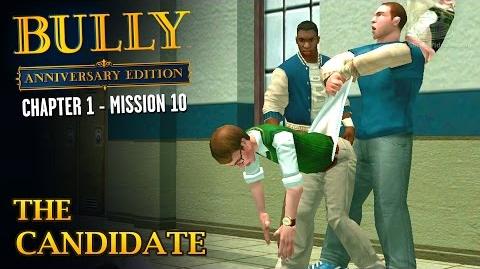