Start a Wiki
The Eggs is one of the main storyline missions in Chapter 2.

Tad will not allow Jimmy to start the mission if he isn't dressed well. Jimmy must be wearing an Aquaberry sweater or vest, which can be purchased from the Aquaberry Outlet in Old Bullworth Vale. He doesn't care whether Jimmy has a good haircut or pants, however.

Jimmy finds Tad Spencer, Chad, and Parker in the upstairs lounge at the Boxing Gym. Tad says he was waiting for Jimmy, and explains their idea of egging Mr. Hattrick's house for nearly getting Mr. Galloway fired. Jimmy asks Tad if he's English, and Tad responds in detail, explaining that he's insecure because his father is a self made man, and he pretends to be old money when he's really just nouveau-riche.

Jimmy is sent to buy the eggs at the Yum Yum Market, and then to meet the Preppies at Tad's house. If he already has full Eggs, he can just go straight to Tad's house. As Jimmy arrives, a cutscene plays. Tad asks him whether he'd called him "inbred". Jimmy denies it, and Tad goes on to make his famous explanation about how "first cousins is legal". Jimmy once again denies he said anything. Gary suddenly appears and accuses Jimmy of having badmouthed Tad's family. He claims that Jimmy said Tad was a hermaphrodite, that his mother was legally also his aunt, and that he probably had webbed toes (which, according to Tad, he does, only on one foot.) Gary then baits Tad into attacking, asking him if he's "going to take that kind of crap from this scumbag?". The Preppies attack Jimmy while Gary quietly slips away.

Jimmy has to beat Justin, who has the key to the front gate, and use the key to open it and escape. There are preppies throwing eggs at him from the second floor of Tad's house and several other Preppies in the yard, but he doesn't have to fight them. Once he gets the gate open and walks out to the street, the mission ends.

Both this mission and Carnival Date must be completed to unlock Race the Vale. 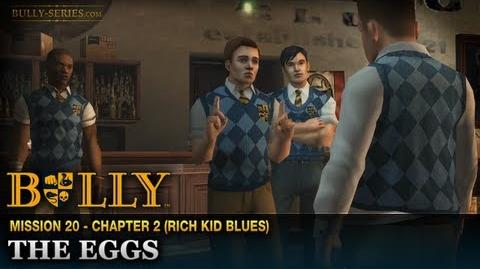 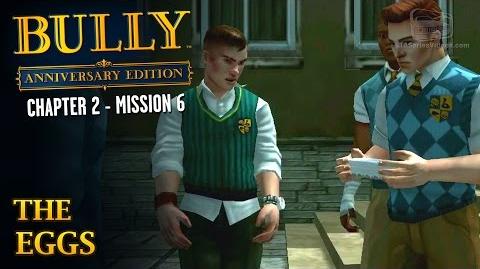