The Gym is Burning

The Gym is Burning is a storyline mission in Chapter 5.

Jimmy is walking around campus when Mr. Burton points out to Jimmy that the gym is on fire. Mr. Burton and two jocks (Bo and Bob) in their wrestling uniforms are out in front of the gym. Burton and the jocks blame Jimmy for having set the fire, using the excuse that he didn't make the football team. Bo even calls Jimmy a bully. Burton then says he's called the police.

As Jimmy defends himself, claiming he never wanted to be on the football team and insisting he didn't set the fire, a scream from Juri echoes. Burton and the two jocks panic, and Jimmy volunteers to go in.

As Jimmy enters the building, wall bars fall over and land on top of Kirby.

To extinguish fires, trigger the fire extinguisher and aim at the flames. The fires will gradually die, and once extinguished will not go back. Be sure to make sure the individual fires are fully extinguished, though, because they'll get stronger again if they aren't. Very brief contact with the flames does no damage, but longer contact does a significant amount.

Once Jimmy puts out the fire by Kirby, he has to lift the wall bars that fell on him. Kirby thanks him and runs out of the gym.

Juri is trapped under the fallen basketball hoop. Jimmy has to lift this too. He then claims "He could have done it himself" but before he can get out of the gym, some burning debris lands in front of him, and Jimmy has to extinguish it before Juri can run.

Mandy is lying knocked out near some burning debris. When he puts out the fire near her, she revives and heads for the gym door, but instead of leaving, stays to encourage Jimmy and plead for him to save the gym. Once Jimmy has put out all the fires, Mandy tells him that she saw "some weirdo" in the locker rooms.

Looking for the culprit, Jimmy heads downstairs to the girl's locker room. The townie Gurney is in the locker room, unknown to Jimmy. He runs out, shoulder ramming Jimmy to knock him down, and escapes.

This mission and Rats in the Library must both be completed to unlock the next mission, Finding Johnny Vincent. 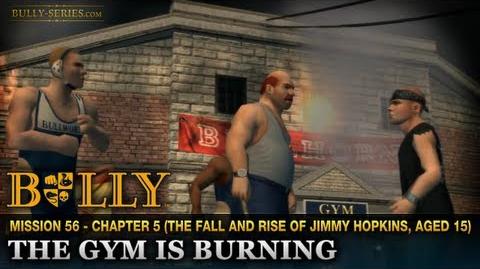 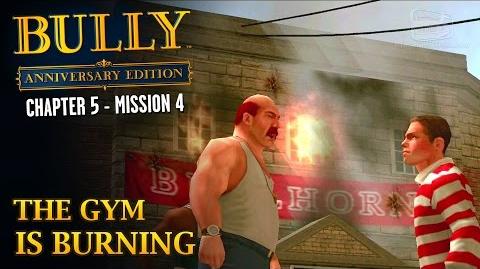