The Rumble is a storyline mission in Chapter 3.

Lola is hanging out under the Underpass. She sees Jimmy walk by and demands to know why he isn't fighting for her.

It turns out that Tad has led the Preppies to New Coventry for an all-out brawl with Johnny and the Greasers. Lola tries to goad Jimmy into joining the fight, but he dismisses her, deciding to try and break it up instead.

First, Jimmy has to find Peanut, as Peanut is most likely to know Johnny's whereabouts.

The Greasers and Preppies are fighting all over New Coventry. The cops are also out, trying to break it up, and the other townsfolk are hiding. When Peanut sees Jimmy coming, he flees on a bicycle. He stops in an alley near the Tenements, where Vance and Lefty back him up. Vance is the one who actually does the talking, stating they'll never tell on Johnny. Peanut has an increased health bar and defense for this fight, and he never does spill the beans on Johnny's location.

After beating the three of them, Jimmy launches into one of his speeches about how he's now in charge of the clique. He forces Hal to say loudly that Jimmy Hopkins is in charge. Johnny then shows up and declares he's going to destroy Jimmy. He levels Jimmy with a haymaker just as the cops show up. The next mission, Fighting Johnny Vincent, starts automatically.

Jimmy fights Peanut, Lefty and Vance in the alley. However, the cutscene afterwards shows Jimmy threatening a badly bruised Hal, who was not there at the fight.

Judging by unused dialogue files, it appears that this mission was at some point scrapped and redesigned from scratch. The first line of programmed non-cutscene dialogue that is actually used is Jimmy's Jimmy_3-06_039_v1 file.

The earliest dialogue files are of Derby giving a pep talk regarding the upcoming brawl to some Preppies including Chad, Parker, and Justin. The next several lines indicate that the Greasers - at least Peanut, Norton, Hal, Vance, and Ricky, are trying to get to Johnny while taking back routes to avoid the police. There is some dialogue with Peanut complaining about someone, presumably Jimmy, following him. There are then some lines from Gord begging for help, followed by him thanking Jimmy for rescuing and Jimmy demanding that Gord help him. Johnny's first line seems to be asking the Greasers to keep Jimmy away while he beats up several Preps. The final unused dialogue line is Hal_3-06_036_v1; he yells "Get him!". There are no 037 or 038 lines in the fines. 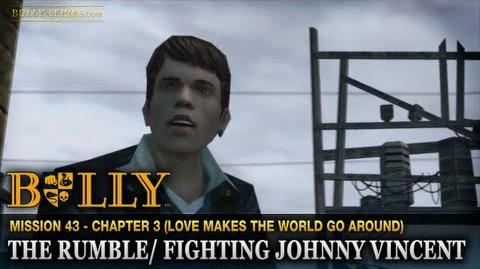 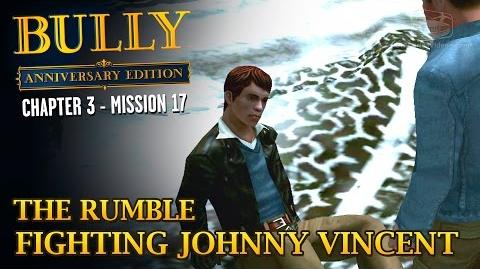