"Why, in my day, we felt nothing of castrating the new boys. I want you to stop this nonsense Hopkins."
― Dr. Crabblesnitch

The Setup is a mission during Chapter 1. It is the first boss fight mission in Bully.

The mission starts when Jimmy is being lectured by Dr. Crabblesnitch about Jimmy's fighting. Jimmy explains this is because of the amount of bullies the school has. Dr. Crabblesnitch says it's only 'school spirit' and that when he was at school bullying the new kid was normal.

After Dr. Crabblesnitch leaves, Jimmy is confronted by Davis, who accuses Jimmy of being a teacher's pet. Jimmy denies this, but Davis attacks Jimmy with his slingshot which prompts Jimmy to chase him.

Don't let Davis escape or the mission will fail.

Running at top speed, Jimmy chases Davis behind the school building, where Davis knocks Pete over. Pete directs Jimmy towards the Auto Repair Shop. Outside the Auto Repair Shop gates, he's attacked by Wade. The game instructs the player to shove Wade into a trashcan and provides a tutorial on how to do so, although Wade can just be fought as normal instead.

After dealing with Wade, Jimmy has to open the gates. He must then make his way through the buildings and parking lots of the shop, fending off Trent, Ethan, Tom, and Wade again. Davis takes refuge on a platform made of scrap wood and old barrels, kicking the ladder down so Jimmy can't use it.

Although he only takes a few hits to defeat, Davis has a large health bar at the top of the screen, and for that reason can be considered a boss.

Davis fires at Jimmy with the slingshot. There isn't much strategy to avoiding it, although by keeping his distance and running Jimmy may avoid the shots. The closer he is, the more difficult the shots are to dodge. If Jimmy picks up a garbage can lid, he can use it to block the shots.

To win the fight, Jimmy has to knock Davis off the platform. The ground in front of them is littered with loose bricks and a few garbage can lids. These can be thrown at Davis. Alternately, if Jimmy has firecrackers in his inventory, he can throw them at Davis. After three hits with the brick and lids or two hits with the firecrackers, Davis' platform crumbles and he falls to the ground. Jimmy takes the slingshot for his own. 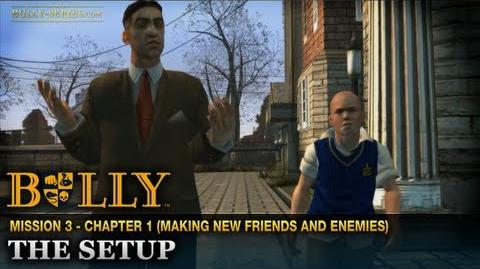 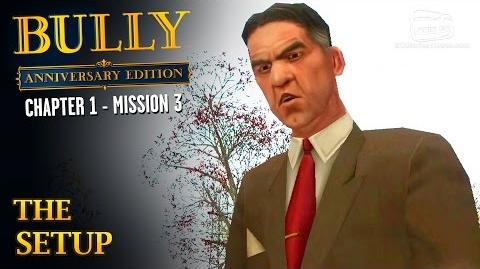