This is the mission. For the location, see The Tenements (location)

The Tenements is a storyline mission in Chapter 3.

Lola is waiting for Jimmy by the Underpass. The Greasers have all turned on her after her kiss with Jimmy in the preceding mission. Now, many of her personal belongings are stuck in the abandoned tenements that they hang out in, and she needs him to go get it all back for her.

The Tenements are in the northeast corner of New Coventry. This is the most run-down part of town. Screams and cries can be heard in the unabandoned buildings. The tenements are condemned, and Jimmy has to enter through a window since the door is barred. They are very run down, some of the floors have fallen out and the walls reduced to their support beams. Old decaying furniture is everywhere.

The clock disappears once Jimmy enters the Tenements.

Jimmy is met inside by Vance, who's wielding a board, and Lefty. Lola's address book is in what used to be the kitchen. Some of Lola's items are inexplicably in locations that Jimmy can't reach without breaking down the walls. Ricky and Lucky are waiting in what used to be a bedroom on the first floor.

Climbing to the second floor, Jimmy finds the hallway has fallen in. He runs into Hal, who runs for help. He, Vance and Lucky attack. Jimmy has to take the fire escape to get around the hole in the floor. Another one of Lola's items is inaccessible behind a wall, but Jimmy finds her lipstick on a counter, then heads to the third floor.

Ricky, Vance and Lucky are all armed with slingshots and waiting at the top of the stairs. Near there, Jimmy finds Lola's bag of laundry. As soon as he picks it up, a cutscene is triggered. Norton has a sledgehammer and he takes a swing at Jimmy, breaking through one of the crumbling walls and sending Jimmy flying. A boss fight triggers.

After winning the fight, Jimmy can pick up the hammer Norton drops. He can then smash the wall on the second floor to get Lola's keys, and a wall on the ground floor to get her perfume. With all five items collected, he can leave the tenements. He has to return the items to Lola, who is waiting by The Underpass.

Norton walks towards Jimmy at a slow pace. He has two main moves with his hammer; an overhead swing, and a swing where he spins around. Getting hit with the hammer does significant damage to Jimmy and knocks him back and to the ground. Norton's swings have a slow start though, and so they can be avoided with a bit of effort. After missing a few swings, Norton runs out of breath and doubles over panting. If Jimmy attacks him while he's panting, Norton doesn't counterattack. If he tries to attack Norton normally, Norton will knock him away with the hammer after Jimmy lands a couple hits.

The best strategy is to shoot away at him with the bottle rocket, or fire crackers. Norton moves slowly and his life can easily be whittled down.

Norton does not drop the sledgehammer, even if hit with a stinkbomb or tripped with marbles. 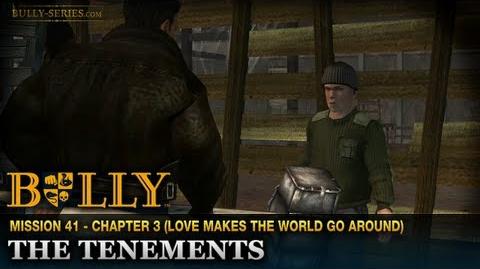 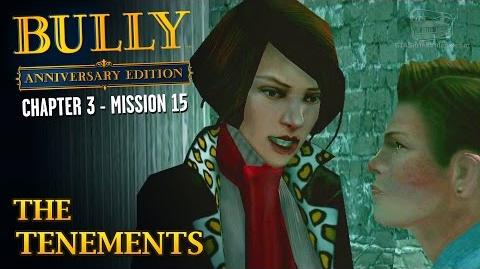