This Is Your School

This Is Your School is a storyline mission in Chapter 1.

Jimmy enters the Main Building to find Gary bullying Algie. After seeing Jimmy, Gary offers to show him around the school, which he refers to as a prison.

First, Jimmy and Gary bump into Russell. Jimmy is forced to pay Russell to not beat him, and Russell gives him a noogie instead. Gary then told him to break into Russell's locker and steal something in revenge. He always receives Bullworth Cap - Classic. They are caught by the prefect Karl, who chases Gary off. Jimmy then hides in a nearby garbage bin until the heat is off.

The two run by the Girls' Bathroom to see Eunice blubbering because someone stole her chocolates. After talking to her, Jimmy goes to the bathroom to retrieve her chocolates, which had been stolen by Constantinos. He can either buy them back, bully Constantinos, or beat Constantinos up and take them. He then returns them and is kissed by Eunice, to Gary's great amusement. They then head to the cafeteria.

Gary shows the four school cliques to Jimmy. The Nerds are represented by Earnest, Algie, and Cornelius who are playing Grottos and Gremlins; the Preppies are represented by Derby and Pinky who are flirting and Tad who is alongside them; the Greasers by Johnny, Hal, and Ricky, who are slouching against the lunch line, and the Jocks by Damon and Juri who are arm wrestling and Ted who is watching them. The two then go to leave, but are told by Edward, another prefect, to get to class. Jimmy heads towards the Chemistry classroom.

Completing the mission unlocks The Setup. It also unlocks classes. Chemistry is the first one, and Jimmy is forced to attend it, but afterwards the class schedule proceeds as normal. The mission also unlocks the clock on top of the screen which would be used for the rest of the game. 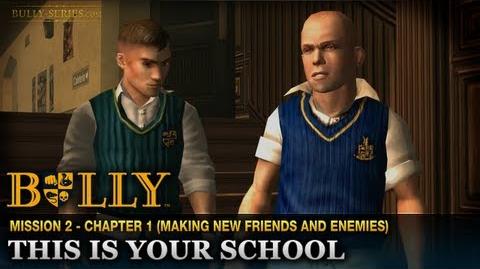 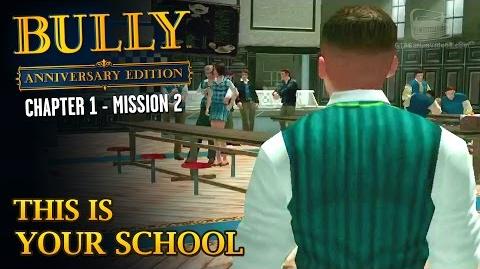