Wrong Part of Town is a storyline mission in Chapter 3.

Jimmy is inside the library when he is called by Earnest. According to Earnest, Johnny Vincent is getting even more paranoid and violent over Lola. Algie has been seen with Lola, and Earnest is worried about him. Jimmy agrees to go find him. Earnest doesn't know where Algie might be, and so he sends Jimmy to see Cornelius. Algie and Cornelius were working on a math project together recently, and Earnest thinks Cornelius will know Algie's whereabouts.

If Cornelius gets knocked out the mission is failed. If Jimmy is able to save Cornelius, he tells him that he lied to the Greasers about Algie being at the pizza parlor. Jimmy has to get a bike and go find Algie in New Coventry.

Algie is in New Coventry outside an alley. Inside the alley, Lola is trying to get Chad to spend $100 on her. Chad is reluctant, as he'll have to steal the money from his dad, and Lola dumps him on the spot, claiming she isn't a "cheap slut". When Algie interrupts, Lola coldly blows him off, calling him "fatso". Chad and Algie both say "But I thought she liked me" at the same time to Jimmy's disgusted amusement. He then tells them they'll have to get out of New Coventry and back to campus as quickly as possible.

It turns out Algie just was helping Lola with her homework. He is forced to ride Lola's bike while Jimmy sits on the back of Chad's bike with his slingshot. Norton sends the Greasers after them. He, Hal, Peanut, Ricky (who notices Algie riding a girl's bike and laughs about it) and Vance all pursue Jimmy and the others on their bikes, throwing fire crackers and eggs. Jimmy must repeatedly fend them off with a slingshot.

The mission ends once they're all back at campus. Chad leaves, saying he can't be seen with them. Earnest and Cornelius are waiting to thank Jimmy, and they invite him to go play Grottos and Gremlins with them. Jimmy brusquely declines.

Both this mission and Tagging must be completed in order to unlock Lola's Race. 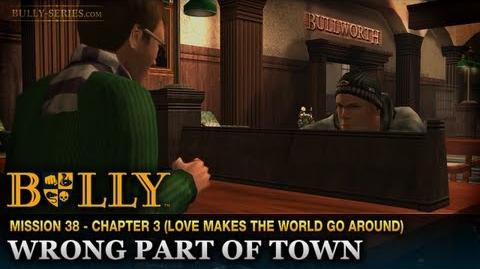 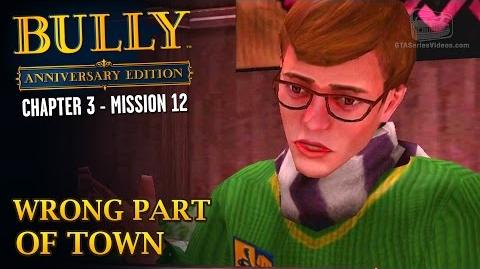