"Why is everyone around here so fake? So much boring B.S."
— Zoe

Zoe Taylor is a main character in Bully. She is a member of the Townies when Jimmy first meets her, and one of the Non-Clique Students while attending Bullworth Academy later on.

Zoe has red hair cut short, brown eyes, and she dresses in punk-style clothing - a cropped white T-shirt with a skull on the front, a light blue jean denim skirt with a flame pattern, a black belt, goth boots, and black lace detached sleeves. She wears a lot of rings on her fingers as well as black nail polish. During the winter, she adds a black bomber jacket. Her school uniform consists of a white school shirt with an orange tartan skirt, a nod to her affiliation with the Townies who favor that color. She also wears black nylons and the same black lace detached sleeves she did as a townie. She has a tattoo of cherries above her right hip that can be seen only when she's in her townie outfit.

An earlier version of Zoe found in Tyler Wilson's art shows her with a much heavier punk influence in her look. She has a mohawk, purple makeup and facial piercings, and her skirt and shirt are both much skimpier. On the website she was said to be one of the Punks, supporting the argument that the Punks slowly evolved to become the Townies. The website later changed her description to say she was a dropout.

Zoe is native to the town of Bullworth. She lives in the largest house in Blue Skies Industrial Park, a once-nice two story with a front porch. Very little is known about her home life, although she apparently has a turbulent relationship with her mom and argues with her frequently. Nothing is known about her dad. She attended Bullworth Academy, but she was expelled after complaining about being sexually harassed by Mr. Burton the year before Jimmy arrived. According to unused dialogue, she and Mandy were once friends.

Zoe is one of the more down to earth people in the game. She and Jimmy seem to have a lot in common; they both come from tough home lives and tend to be credited as being troublemakers, but are both feisty, gutsy kids who enjoy fighting and are prepared to stand up to corruption. She seems to be intelligent and likes to read, though she claims this is strictly out of boredom. She complains about how everyone in Bullworth is "fake", and has personal grudges against Mr. Burton and Tad Spencer. She states that she prefers to date older men and junkies, thinking that they're more "romantic", but she eventually develops feelings for Jimmy and dates him in the end.

Although she's not a full-fledged tomboy, Zoe has several likes and interests that aren't stereotypically girly. Her idea of a good date is smashing up the inventory of Spencer Shipping, she laughs when someone throws a dead rat, and her dialogue when threatening and fighting indicate that she enjoys it. However, she isn't tougher than any other girl in the game.

Zoe can be seen as early as Chapter 2, as she participates in the street Go-Kart Races, but she can't be interacted with.

Jimmy first meets Zoe while wandering around Blue Skies Industrial Park, where they almost get in a fight when Zoe aggressively asks Jimmy what he's looking at. They hit it off pretty well after discovering their mutual dislike of Mr. Burton, and become friends during a revenge prank on him that involves using a driving mower to push the port-a-potty he's using down a hill. Later, they go on a date of Zoe's choice - smashing up the inventory in Spencer Shipping Warehouse.

When Jimmy is expelled and is looking for the Townies' leader Edgar Munsen, Zoe helps Jimmy track Edgar down, at one point distracting the Townies so Jimmy can sneak past them.

At the end of Chapter 5, Zoe is readmitted to Bullworth after Jimmy tells Dr. Crabblesnitch that she was unfairly expelled. Jimmy and Zoe kiss as the credits roll.

A beta version of Zoe

Another image of the beta version of Zoe 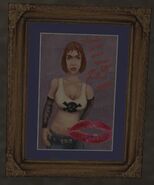 A picture of Zoe earned after completing Smash It Up